Piglet meets Frazier: certainly didn’t see that coming. But that is exactly what is happening as Man Of La Mancha trots into town for a short season at the Coliseum in April and May. Frazier aficionados (yeah, that’s Spanish) of the American TV sit-com anti-hero may not be aware that creator of that character, Kelsey Grammer, is also rather adept at musical theatre in which he sports a finely resonant tenor voice. Grammer plays the dual roles of Miguel de Cervantes (the writer) and Don Quixote in this eagerly awaited revival of the 1965 musical not seen in the West End for 50-odd years. And joining him is fellow TV-rooted thespian, whom Grammer affectionally refers to as “Dipstick”, Nicholas Lyndhurst whom most will remember as part of that elite band of small-time desperados (yeah, also Spanish) featured in John Sullivan’s Only Fools and Caballos (you’ve got it) – though I prefer to muse upon his starring title role in the matchless The Piglet Files (written by Brian Leveson and Paul Minett) which to my mind was far superior (DON’T @ me!). Lyndhurst featured in Carousel at the Coliseum – one of a number of full-scale musical revivals that have featured in this early summer spot.

Lyndhurst plays two roles – The Governor and a Keeper of the Taverna (so Spanish). Asked whether Frazier was ever likely to return Grammer hedged his bets a bit leaving the door open for a possible comeback. As for Only Fools… Lyndhurst’s response was an unequivocal “¡No!” (Spanish for no). There is, however, a musical version on right now at the Theatre Royal, Haymarket: Only Fools and Horses The Musical.

Joining the Burrito Brothers (see what I did there?) in this quixotic fiesta is internationally acclaimed opera star Danielle de Niese, who has been called “Opera’s coolest soprano” and who takes the roles of Aldonza and Dulcinea. Australian by birth, de Niese made her debut at the age of 18 in Les Miserables and has since sung in Opera Houses all over the globe as well as performing on film and TV and she is obviously no stranger to the Coliseum. Having grown up in a musical theatre-obsessed family she has a deep-seated familiarity with Man Of La Mancha’s enduring and defining song – The Impossible Dream – which di Niese duets with Grammer. She says that it was always her Mother’s dream that her daughter would sing it on stage one day: ¡los sueños se hacen realidad! (Dreams do come true: it’s Spanish). 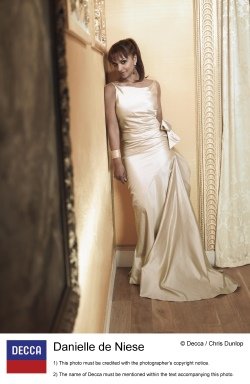 Due to availability and other projects – there’s a big demand for de Niese’s varied talents – she is sharing the roles with musical theatre estrella (yep) Cassidy Janson who was recently seen in the lead role in the brilliant Beautiful: The Carole King Musical. She actually duetted with Carole King at a Hyde Park gig in front of 65,000 people! Janson has also appeared in Company, Avenue Q and Wicked as well as appearing in film and on TV.

The project is the brain-child of co-producer Michael Linnit who, with Michael Grade, has brought Chess, Carousel, Sunset Boulevard and Sweeney Todd to this unique season at the Coliseum, in conjunction with the English National Opera. Linnet saw the original London production in 1968 and has been chasing the holders for the rights of the show for the last 20 years: the holders – all in their high eighties and more – are the three widows of the original writers (book by Dale Wasserman, lyrics by Joe Darion, music by Mitch Leigh) who delight in squabbling amongst themselves, quibbling with potential producers, and taking prevarication to the level of performance art. When one died Linnit seized his opportunity, flew to New York, got the remaining two in a room and banged their handbags together until he got a result. Thus we have a highly anticipated revival!

Contractural considerations ensure that nothing can be changed from the original though director Lonny Price (who also directed the Coliseum Sunset Boulevard revival) will be be creating his own new concept for the show. Whether this might reflect the state of current global politics – a metaphor, perhaps, for some unnamed powerful world leader with self-professed grandes cojones charging around tilting at windmills – I wouldn’t like to say: but with this cast one can rest assured that it’s going to be a spectacular show – moving and fun.

So with that may I say adiós and buenos dias: I’m off for my siesta. (or, more likely, down the bodegas).