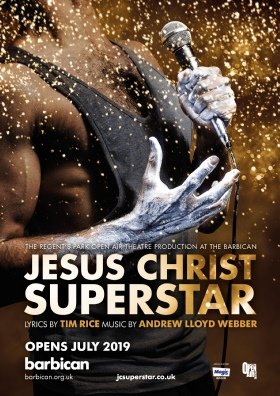 Regent’s Park Theatre have today announced principal casting for their productions of Tim Rice and Andrew Lloyd Webber’s Evita and Jesus Christ Superstar, alongside the full creative team for Evita.

Jesus Christ Superstar previously played two sell-out seasons at the Open Air Theatre before transferring to the Lyric Opera of Chicago in 2018. It will embark on a North American tour from October.

EVITA PRINCIPAL CASTING
“After an international search, I am incredibly excited about the amazing talent we have discovered, and the variety of voices we have assembled, to share this story today. Samantha Pauly will lead a thrillingly diverse and powerful company.” Jamie Lloyd, Director

Chicago-based Samantha Pauly makes her UK debut in the role of Eva Peron, direct from her performance in SIX (Chicago Shakespeare Theatre) and as Valkyrie in Bat Out Of Hell (US Tour). She appears alongside Ektor Rivera, also making his UK debut, having recently played Emilio Estefan in On Your Feet! on Broadway and US Tour. In addition to lead roles in Rent, Hairspray and High School Musical, Ektor was selected by Jennifer López to be one of the lead singers in the US Television and Live show Q’Viva! The Chosen, which was seen by over 30 million television viewers.

An original Broadway cast member of Disney’s Aladdin – where he has been performing on and off for the last 5 years – Trent Saunders returns to the UK in the role of Che following his appearance as St. Jimmy in Green Day’s American Idiot (Hammersmith Apollo). Nominated for an Olivier Award for her role as Kylah in Our Ladies of Perpetual Succour, Frances Mayli McCann plays the role of The Mistress.

Evita premiered in the West End in 1978, and features a chart-topping score including Don’t Cry For Me Argentina, Oh! What A Circus, Another Suitcase in Another Hall, and the Academy Award-winning You Must Love Me, originally performed by Madonna in the motion picture.

JESUS CHRIST SUPERSTAR NEW PRINCIPAL CASTING
The new cast of Jesus Christ Superstar includes: Robert Tripolino and Ricardo Afonso in the iconic roles of Jesus and Judas, with Sallay Garnett as Mary. Matt Cardle* plays the role of Pilate, with Cavin Cornwall and Nathan Amzi as Caiaphas and Annas.

Ricardo Afonso (Judas) previously appeared as the Taxi Driver in Women On The Verge Of A Nervous Breakdown (Playhouse), as Alberto Beddini in Top Hat (Aldwych/UK Tour), Lead Vocalist in Thriller Live (Lyric), Galileo in We Will Rock You (Dominion), and as a lead vocalist in The Classic Rock Show (European/UK Tour), The Wonderful World of Captain Beaky and His Band (Royal Albert Hall) and Strictly Come Dancing – The Professionals (UK Tour). Angolan born Ricardo appeared on The Voice UK series 2, and is a recording artist working in the UK and in Portugal. He is currently recording his first original album with his band The Deccan Traps.

Sallay Garnett (Mary) is an Irish-Sierra Leonean artist, who also performs and records under the name Loah. With her unique blend of Afro-soul, she released her debut album This Heart in 2017. She has toured in Ireland, the UK, Sierra Leone, the USA and has held major slots at festivals including Electric Picnic, Body&Soul, Longitude, Cork Jazz Festival, Sounds from a Safe Harbour, and the Dublin Fringe Festival. She recently appeared in the film A Girl From Mogadishu (GFM Films) and has completed filming for the forthcoming film The Last Right (Deadpan Pictures).

Matt Cardle (Pilate) is a multi-platinum selling recording artist who has sold over 2.2 million records since he won The X Factor in 2010. He has released four studios albums including 2011’s Letters, featuring the single When We Collide, and most recently 2018’s Time To Be Alive; both on Sony Music. In 2015 he joined the cast of Memphis (Shaftesbury) as Huey Calhoun, winning him the WhatsOnStage Award for Best West End Debut, and he returned to the stage in 2018, appearing as Wally Strand in Strictly Ballroom (Piccadilly).
* Please note that Matt Cardle will not appear on Saturday 13 July (evening), Tuesday 30 July, Wednesday 31 July or Saturday 3 August (evening).

Cavin Cornwall (Caiaphas) originated the role of Caiaphas in the Regent’s Park Open Air Theatre production of Jesus Christ Superstar, reprising the role at the Lyric Opera of Chicago in 2018. He previously played Caiaphas on the UK arena tour of Jesus Christ Superstar having originally played Peter in the 1999 film version (Really Useful Films). He is currently appearing in Rip It Up (Garrick). Other theatre credits include: Disney’s Aladdin (Prince Edward), The Color Purple (Cadogan Hall), Sister Act (UK Tour), Billy Flynn in Chicago (Adelphi) and Crown in Porgy and Bess (Savoy). On film credits include, for the Star Wars franchise: Han Solo A Smuggler’s Trade, Star Wars VII The Force Awakens and The Last Jedi. Also Paddington 2, and Les Misérables.

Soutra Gilmour (Designer) designed The Turn of the Screw for Regent’s Park in 2018, as well as Into The Woods, which subsequently played in Central Park, New York for the Public Theater. Recent theatre credits include: Betrayal and Pinter at the Pinter (Harold Pinter), Jack the Ripper (ENO), Timon of Athens (RSC), Knives in Hens (Donmar Warehouse) and Twelfth Night (National Theatre).

Nick Lidster (Sound Designer) is a senior member of the Autograph design team. Previously for Regent’s Park, credits include Little Shop of Horrors, The Turn of the Screw, On The Town and Jesus Christ Superstar (Olivier Award Best Sound Design nomination, also at the Lyric Opera of Chicago). Current projects include: The Band (Theatre Royal Haymarket/UK Tour) and Calendar Girls the Musical (UK Tour).

Barbara Houseman (Season Associate Director, Voice and Text) has been Voice and Text Coach at Regent’s Park since 2019, and Season Associate Director since 2014. Recent credits include: Strictly Ballroom (Piccadilly), The Ferryman (Gielgud), Rosencrantz & Guildenstern are Dead (Old Vic), The Curious Incident of the Dog in the Night-Time (Gielgud/Tour), St Joan, All Female Trilogy, Les Liaisons Dangereuses, Coriolanus, Trelawny of the Wells (Donmar Warehouse) and the Kenneth Branagh Season (Garrick).

Will Burton CDG for DGA (Casting) has previously cast Jesus Christ Superstar for Regent’s Park, including the 2019 production at the Barbican. Other recent credits include: Heathers (Theatre Royal Haymarket); Everybody’s Talking About Jamie, Urinetown (Apollo); Matilda (Cambridge Theatre); Waitress (Adelphi) and Bat Out of Hell (Dominion/Coliseum). Films include: Mary Poppins Returns and Disney’s Beauty and the Beast.