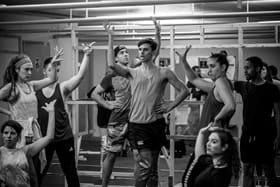 Sedos presents a new sell-out production of the award-winning musical Priscilla Queen of the Desert at the Bridewell Theatre, off Fleet Street, from 22nd November – 2nd December 2017. The musical, which has book by Stephan Elliott and Allan Scott, is based on the 1994 Oscar winning Latent Image/Specific Films Motion Picture distributed by Metro-Goldwyn-Mayer Inc.

The critically-acclaimed stage musical version of Priscilla has played to packed houses all over the world during its 11-year journey since its premiere in Sydney in 2006. Sedos’ new production of Priscilla promises a vibrant and energetic production – with a cast of 25, many of whom are featuring in their first Sedos production.

A colourful and vibrant spectacular featuring all-time dance and pop hits from the 80’s and 90’s, the story follows the adventure of three friends brought together under unique circumstances. They travel in a wonderfully quirky bus from the glamour and sparkle of Sydney as they ‘Go West’ into the heart of the Australian desert continent.
The production has direction by Angus Jacobs, musical direction by Ryan Macaulay and choreography by Eloise Horton.

Director Angus Jacobs said: “We are thrilled to be bringing our special touch to this wonderful production and even more so that the run is completely sold out. We have designed some stunning original costumes for this production and coupled with the unique challenges (or opportunities!) presented by getting a moving bus onto the stage of the Bridewell Theatre, we are really thrilled with our fresh take on the show.

“From our first workshops back in July to our opening night later this month, the team have worked so hard and we can’t wait to share ‘our Priscilla’ with the audience.”

Since 2012 Sedos has been the resident theatre company at the Bridewell Theatre.
More information about SEDOS

LISTINGS DETAILS
Priscilla Queen of the Desert The Musical

Book by Stephan Elliott and Allan Scott, and based on the Latent Image/Specific Films Motion Picture distributed by Metro-Goldwyn-Mayer Inc.
Wednesday 22 November to Saturday 2 December 2017
Evenings at 7.30pm, Saturday matinees at 2.30pm
Bridewell Theatre, Bride Lane, off Fleet Street, London EC4Y 8EQ
The whole run is sold out, but returns may be available from the theatre box office, which opens 30 minutes before the performance. More info: sedos.co.uk

THE PRINCE OF EGYPT, the hit musical based on the classic DreamWorks Animation film, is proud to confirm the complete cast, orchestra and company of … END_OF_DOCUMENT_TOKEN_TO_BE_REPLACED

Tom loves a laugh! But it’s no joke when he can’t even remember where he’s parked the car... Fortunately, his loving wife Trish comes to the … END_OF_DOCUMENT_TOKEN_TO_BE_REPLACED

Following a sell-out tour in 2018/2019, the producers of the smash-hit ROCK OF AGES are delighted to announce the cast and Kevin Clifton’s return in … END_OF_DOCUMENT_TOKEN_TO_BE_REPLACED

The classic tale of The Three Musketeers is brought to you by the inconceivable, unimaginable and fantastical FoolHardy Theatre… a company with … END_OF_DOCUMENT_TOKEN_TO_BE_REPLACED