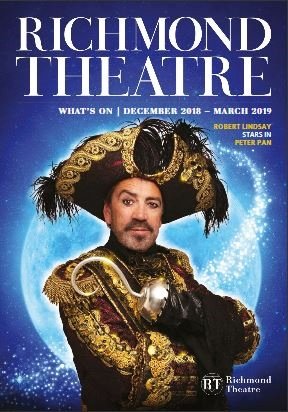 It isn’t long before audiences can set sail for this year’s swashbuckling spectacular, PETER PAN, in Richmond Theatre’s second pantomime staged by Qdos Entertainment. Starring Robert Lindsay in his pantomime debut as the dastardly villain Captain Hook, comedy impressionist and Britain’s Got Talent finalist, Jon Clegg as Mr Smee, West End star Rachel Stanley (Officer and A Gentlemen, Scrooge The Musical, Legally Blonde) as the Magical Mermaid, and Harry Francis (Book of Mormon, A Chorus Line, Fiddler on the Roof) as the boy who never grew up, Peter Pan. Press are invited to attend for review on Thursday 13th December at 7pm.

The first in a series of special event shows produced exclusively for Richmond Theatre audiences by Theatre Director Brendan Riding, GO!GO!GO! WITH RUSTY FIRMIN tells the true story of the SAS’s incredible rescue mission during the Iranian Embassy Siege in 1980. Rusty Firmin served 26 years in the British Army, 15 of which in B Squadron, 22 SAS. Audiences will get an unparalleled insight into his SAS career, SAS selection and a detailed account of the mission, which propelled the secretive 22 SAS onto the world stage. The evening will also be in support of Pilgrim Bandits, a charity which was established by a small group of Special Forces veterans in 2007 with the sole aim of using their unique training and experience to help and inspire injured personnel to live life to the full.

The MOSCOW CITY BALLET return to Richmond with two magnificent shows, SWAN LAKE and SLEEPING BEAUTY, each presented in classic Russian style with a full orchestra. Using Tchaikovsky’s haunting and beautiful score, these enchanting stories are brought exquisitely to life by Russia’s best dancers along with beautiful sets and stunning costumes.

Based on Paula Hawkins’ best-selling novel, THE GIRL ON THE TRAIN pulls into Richmond for a brand new stage adaptation starring Samantha Womack (Eastenders, Game On, The Kingsman film series) and Oliver Farnworth (Coronation Street, Hollyoaks). When Rachel suddenly learns that the woman she’s been secretly watching has suddenly disappeared, she finds herself as a witness and even a suspect in a thrilling mystery in which she will face bigger revelations than she ever could have anticipated.

New comedy, TRIAL BY LAUGHTER is based on the real life events of bookseller, publisher and satirist, William Hone who stood trial in 1817 for ‘impious blasphemy and seditious libel’ however the only crime he had committed was to be funny! Following critical acclaim for their play, The Wipers Times, Trial By Laughter looks set to be another successful and sharp comedy from writers Ian Hislop and Nick Newman.

Presented by London Classic Theatre, the award-winning play MY MOTHER SAID I NEVER SHOULD details the lives of four women through the 20th century using a kaleidoscopic time structure, it focuses on pinnacle moments of each woman’s lives in a poignant, bittersweet story about love, jealousy and the price of freedom. Written in 1985 by Charlotte Keatley, it has become the most widely commonly performed work by a female playwright in the world, a true classic.

In one of the most successful comedies of all time, Nigel Havers (Downton Abbey, Chariots of Fire), Denis Lawson (Bleak House, New Tricks) and Stephen Tompkinson (The Split, Wild at Heart, Ballykissangel) come together in ART, a dazzling study of friendship, prejudice and tolerance. Written by Yasmina Reza, Art has taken both Broadway and the West End by storm having won Olivier, Tony® and Moliére awards.

Direct from the West End and following rave reviews, WISE CHILDREN is a big, bawdy tangle of theatrical joy and pain featuring show girls, Shakespeare, sex and scandal, mischief and mistaken identity – and butterflies by the thousand! Emma Rice (Romantics Anonymous, Tristan & Yseult, The Flying Lovers of Vitebsk and Brief Encounter) launches her new theatre company of the same name and in their first production, brings her unique, musical and exuberantly impish vision to Angela Carter’s great last novel.

Two fantastic children’s shows head to Richmond for the perfect spring treat for schools and families. Based on the classic children’s book series by David McKee, ELMER THE PATCHWORK ELEPHANT celebrates its 30th birthday in 2019 with a brand new show featuring a menagerie of 21 loveable puppets telling the tale of an elephant that stands out. Also, from the award-winning producers of Horrible Histories and Gangsta Granny comes the world premiere of TOM GATES LIVE ON STAGE in an exciting and hilarious adventure based on the original creation by Liz Pichon.

From adventurers to actors, we have an abundance of special events coming up including, DR ALICE ROBERTS: DIGGING INTO BRITAIN’S PAST, HANCOCK’S HALF HOUR, IAN MCKELLEN ON STAGE WITH TOLKIEN, SHAKESPEARE OTHERS AND YOU, AN EVENING WITH KEN HOM, STRICTLY ANN WIDDICOMBE – AN INTIMATE EVENING WITH, ADAM KAY – THIS IS GOING TO HURT, BEN FOGLE – ADVENTURES IN THE WILDERNESS and TRUST FAST HEALTH WITH DR MICHAEL MOSLEY.

Some classic music acts return to Richmond with BEYOND THE BARRICADE, THAT’LL BE THE DAY, THE COUNTERFEIT STONES, THE CARPENTERS STORY and SEVEN DRUNK NIGHTS THE STORY OF THE DUBLINERS plus the brand new show HELLO AGAIN…NEIL DIAMOND.

Richmond Theatre is dedicated to making sure people of all ages and abilities can take part in theatre and the arts, and our Creative Learning Department has various workshops and courses that are inclusive and fun for all! For further information regarding workshops and creative learning bookings, please contact richmondcreativelearning@theambassadors.com.

Special Event Listings:
An Evening with Alice Roberts: Digging Into Britain’s Past
Thu 10 Jan at 7.30pm

Ian McKellen on stage with Tolkien, Shakespeare, Others and You
Mon 4 Feb at 7.30pm

Ben Fogle – Adventures in the Wilderness
Sun 3 Mar at 7.30pm

Seven Drunken Nights – The Story of the Dubliners
Sun 31 Mar at 7.30pm

'Look anyone will tell you, I’m a pretty straight sort of guy.' Tony Blair A reckless reappraisal of the life of former Ugly Rumours front man and … END_OF_DOCUMENT_TOKEN_TO_BE_REPLACED

Michael Harrison and the Really Useful Group are thrilled to announce that The Wizard of Oz, the musical based on the iconic story by L. Frank Baum, … END_OF_DOCUMENT_TOKEN_TO_BE_REPLACED

Following major demand for tickets, the Queen of comedy Dawn French has announced a host of new UK tour dates for her critically acclaimed live … END_OF_DOCUMENT_TOKEN_TO_BE_REPLACED