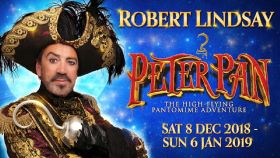 Richmond Theatre has today announced the multi-award-winning actor of stage and screen, Robert Lindsay will make his pantomime debut starring as the dastardly Captain Hook in the theatres’ second pantomime staged by Qdos Entertainment, Peter Pan from Saturday 8th December – Sunday 6th January 2019. Press are invited to attend for review on Wednesday 12 December at 7pm.

The BAFTA, Tony and two-time Olivier Award-winning actor has enjoyed a hugely successful career starring in the popular BBC sitcom My Family and Citizen Smith as well as numerous Shakespearean adaptations including A Midsummer Night’s Dream, Much Ado About Nothing and starred opposite Laurence Olivier in King Lear. His further television roles include Galavant, GBH, Hornblower, Jericho, Friends and Crocodiles and Gideon’s Daughters, both by Stephen Poliakoff.

Robert starred as Bill Snibson in the critically acclaimed revival of Me and My Girl, a role he reprised on Broadway to award-winning success. He also appeared in Dirty Rotten Scoundrels, Onassis and The Entertainer and regularly appeared onstage with the Royal Shakespeare Company.

Robert will play the meanest man in Neverland, Captain James Hook in Peter Pan, Richmond Theatre’s second pantomime stage by Qdos Entertainment, the world’s biggest pantomime producer. Robert will be joined by a host of colourful characters in a production packed full of high-flying sequences, sword-fights, song and dance and a galleon-full of comedy following on from the success of last year’s pantomime, Aladdin.

Qdos Entertainment Managing Director Michael Harrison said, “It’s fantastic that we have hooked Robert to star in Peter Pan for us in Richmond. He is, without question, one of the UK’s finest actors and audiences will be sure to boo and hiss a Captain Hook with fantastic stage presence, a wonderful singing voice and ferocious comic timing.”

Richmond Theatre’s Theatre Director Brendan Riding said, “I am very proud of Richmond Theatre’s ability to attract the highest calibre of star talent for our wonderful audiences. Michael and his team at Qdos have worked their magic to secure Robert in his pantomime debut and it’s sure to be this panto season’s must see turn, with Robert frightening and delighting in equal measure!”

With tickets soaring out of the Box Office, audiences shouldn’t leave it any longer to embark on the Jolly Roger and set sail for Neverland for this year’s sensational, swashbuckling show.

Regent’s Park Open Air Theatre have today confirmed the casting for the title roles in Romeo and Juliet, which opens the 2021 season on Thursday 17 … END_OF_DOCUMENT_TOKEN_TO_BE_REPLACED

Andrew Lloyd Webber’s The Phantom of the Opera returns to its home, Her Majesty’s Theatre London, from 27th July. Experience the thrill of the West … END_OF_DOCUMENT_TOKEN_TO_BE_REPLACED