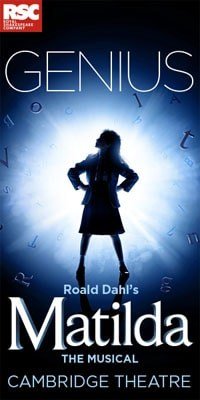 Following the sold-out success of the previous relaxed performances of Matilda The Musical, the Royal Shakespeare Company will present its fifth at the Cambridge Theatre at 3pm on Sunday 10 June. The UK and Ireland Tour of the show began performances earlier this month and will host its first relaxed performance at Birmingham Hippodrome at 2pm on Thursday 19 July.

Building on the programme of relaxed performances that the RSC has been running in Stratford-upon-Avon since 2013, the RSC is proud to have been amongst the first to adopt and promote the concept. The National Autistic Society and Mousetrap Theatre Projects will again work closely with the RSC, offering full access to the theatre for people with autism and learning disabilities and their families.

The performance provides a relaxed environment for everyone, with elements of the production adapted to reduce anxiety or stress, and with lighting and sound levels adjusted to soften their impact. Audience etiquette throughout the whole theatre is also relaxed with all audience members given the freedom to make noise and/or move about the auditorium according to their needs without restriction. Designated ‘chill-out’ areas are provided outside the auditorium with soft seating and activities available for people to use if they want to take a break. All theatre staff, crew and company members also receive specialist training in advance to anticipate a wider range of different audience needs.

In London, the Royal Shakespeare Company is offering tickets at a reduced rate which can be booked through the RSC Ticket Hotline or in person at the Cambridge Theatre box office. Tickets for the Birmingham Hippodrome relaxed performance can be made through the box office ticket sales line.

Specially trained staff will be able to help bookers by speaking to them directly and ensuring that all their specific needs and requirements are taken into consideration when assigning their seat allocation.

All bookers will be sent a visual story to help them familiarise themselves with the plot, characters and the setting before they arrive at the theatre. Detailed event and transport information will also be available from www.matildathemusical.com.

Matilda The Musical has now been seen by more than 7.7 million people worldwide, having played in over 60 cities with more than 5500 performances in the West End, on Broadway, across North America and in Australia and New Zealand.

Matilda The Musical swept the board at the 2012 Olivier Awards, with a record-breaking seven awards, and won four Tony Awards and a Tony Honor for Excellence in the Theater for the four girls sharing the title role on Broadway. The North America production toured to 52 cities.

The Australian and New Zealand production won a Sydney Theatre Award for Best Musical in 2015, and played sold-out seasons in Melbourne, Brisbane, Perth, Adelaide and Auckland. The show broke further records in July 2016 by winning all 13 Helpmann Awards for which it was nominated. Matilda The Musical will have its first non-English language production at the LG Arts Centre in Seoul, South Korea from September 2018 until February 2019.

Matilda The Musical is produced in the West End by the Royal Shakespeare Company with André Ptaszynski and Denise Wood as Executive Producers. The production was developed with the support of Company Dramaturg Jeanie O’Hare and the RSC Literary Department.

Book Matilda the Musical Tickets for The Cambridge Theatre, London.