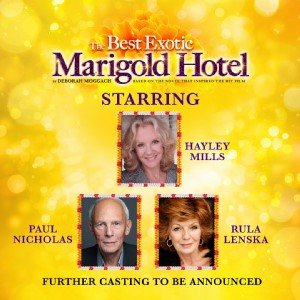 Rula Lenska was born Countess Roza-Marie Leopoldyna Lubienska in St. Neots to Polish parents who had fled their homeland, their family estate having been confiscated by Communist forces. Following her education at an Ursuline College in Kent, she became an actor, gaining her first notable starring role in Rock Follies in 1976, going on to appear in many iconic television series such as Robin of Sherwood, Doctor Who, EastEnders, To The Manor Born and Minder, ITV’s Coronation Street as Claudia Colby, and most recently a BAFTA-nominated Inside No 9 for BBC 2.

A passionate stage actor, she has appeared in The Vagina Monologues, Calendar Girls, Pygmalion, Seven Deadly Sins, Four Deadly Sinners, Eurobeat at the Edinburgh Festival, and 84 Charing Cross Road. She is involved in the development of a one-woman show about Rita Hayworth.

When not working Rula is a devoted grandmother and a practicing Buddhist, who is involved in the support of several conservation charities such as Born Free, Animal Asia, and The Daphne Sheldrick Trust.

She has lent her instantly recognizable voice to several audiobooks and was in several series of the much-loved radio show, The Hitchhiker’s Guide to the Galaxy, which first aired on BBC Radio 4 in May 2005. Her autobiography My Colourful Life is available now.

Paula Wilcox was previously announced to join the cast but has had to withdraw from the production due to scheduling. Further casting is to be confirmed.

The play’s book is written by Deborah Moggach who now adapts her bestselling novel 2004’s These Foolish Things for the stage, it having previously inspired the BAFTA and Golden Globe-nominated film. The cherished story will be brought to life on stage when it opens at the Richmond Theatre on Monday 5th September 2022 and is directed by Lucy Bailey (Oleanna, UK Tour & West End); Gaslight, UK Tour; Witness for the Prosecution, London’s County Hall).

Based on the Sunday Times bestseller which inspired one of this century’s most treasured films, The Best Exotic Marigold Hotel takes us on a journey to India with an eclectic group of British retirees as they embark on a new life. The luxury residence is far from the opulence they were promised, but as their lives begin to intertwine and they embrace the vibrancy of modern-day India, they are charmed in unexpected and life-changing ways.

The Best Exotic Marigold Hotel is a joyous, feel-good comedy about taking risks, finding love, and embracing second chances, even in the most surprising of places.

The film The Best Exotic Marigold Hotel (directed by John Madden) saw its UK theatrical release in 2012. Within two weeks of its cinematic distribution, the film had topped the UK Box Office and went on to become a hit internationally performing as one of the highest-grossing films of 2012 in Australia and New Zealand in addition to the United Kingdom.

The interwoven stories of the film’s stellar ensemble, which included Judi Dench, Bill Nighy, Maggie Smith, Penelope Wilson, Tom Wilkinson, Celie Imrie, and Ronald Pickup – with Dev Patel as the put-upon owner of a past-its-best hotel for ‘the elderly and beautiful’ – shone a light on issues such as the outsourcing of care and NHS treatments, the complexity of family relationships around the world, love, compassion, and companionship in our twilight years.

Get ready for the journey of a lifetime.

Adapted from Susan Hill’s classic book, The Woman in Black at the Fortune Theatre has been thrilling London audiences since 1989. In The Woman … END_OF_DOCUMENT_TOKEN_TO_BE_REPLACED

The producers of the multi-award-winning, critically acclaimed production of CABARET at the KIT KAT CLUB in London’s West End are thrilled to announce … END_OF_DOCUMENT_TOKEN_TO_BE_REPLACED

With well over three thousand productions at the Edinburgh Festival Fringe 2022, here’s my attempt at a list of recommendations. I Wish My Life … END_OF_DOCUMENT_TOKEN_TO_BE_REPLACED