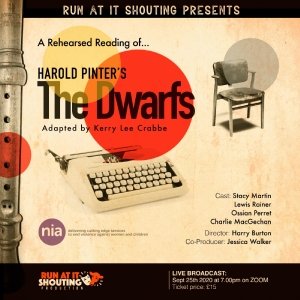 Adapted from Harold Pinter’s only novel, The Dwarfs follows three old school friends, Mark, Pete and Len who knock about the streets, pubs and cafes of East London arguing the toss about art, life and love. The fourth member of their tight-knit group is Virginia, a young teacher. As autumn draws in, each of the friends finds their perception of one another and themselves irrevocably changed.

Kerry Lee Crabbe’s adaptation of The Dwarfs was originally developed at the National Theatre Studio. It was screened on BBC Four in October 2002, receiving its stage première at the Tricycle Theatre in April 2003.

Harold Pinter (1930 – 2008) is the author of 29 plays including The Birthday Party, The Caretaker, The Homecoming and Ashes to Ashes, and 20 screenplays including The Servant, Accident, The Go-Between and The French Lieutenant’s Woman. He has directed productions in London, New York, Paris and Palermo. His work as an actor includes No Man’s Land at the Almeida, The Hothouse at the Comedy Theatre, The Collection at the Donmar Warehouse and the film Mansfield Park. He is the author of Various Voices – Prose, Poetry, Politics 1948-1998. In 2003 Pinter was made a Companion of Honour for Services to Literature, and in 2005 was awarded the Nobel Prize for Literature.

Charlie MacGechan plays Mark. His film credits include We Die Young, The Girl From The Song and Deus.

Stacy Martin plays Virginia. Her film credits include Casanova, Last Love, The Night House, High-Rise, Tale of Tales, Jouers (Treat Me Like Fire), All The Money In The World, The Lady in the Car with Glasses and a Gun, The Childhood of a Leader, An Evening Hour, Vox Lux and Nymphomaniac. Her new film Amants is about to open at the Venice Film Festival.

Lewis Rainer plays Pete. His theatre credits include Angus, Thongs and Even More Snogging (West Yorkshire Playhouse); and for television his credits include Grange Hill, Dani’s House, Death Come To Pemberley, Endeavour, After Louise, The Crash. His film credits include Flyspy, A Hologram For The King, And Then I Was French and The Girl From The Song.

Ossian Perret plays Len. His television credits include The Witcher, The First Team, The Last Kingdom and Sanctuary.

NIA is a Hackney-based charity committed to delivering cutting edge service to end violence against women and children. Estimates suggest that domestic violence has increased 50% during Lockdown. NIA runs services for women and girls who have been subjected to sexual and domestic violence and abuse, including prostitution.