The Lyric Hammersmith’s Assistant Director, Kwame Owusu, asserts that we are currently in a ‘New Restoration’ theatre period because we’ve now managed to enjoy 9 months of full capacity after two years of darkened or restricted stages. However, whilst we emerge from the plague – a point mentioned with brilliant asperity in Mike Bartlett’s taut and delicious script – we may be rejoicing at the return of some previously curtailed freedoms, but we find ourselves living in precisely the sort of farce that ebbed from the pens of the great Restoration comedians like William Wycherley. 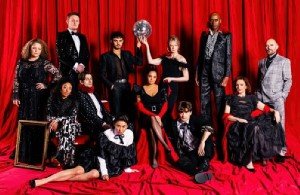 It’s easy to think of Restoration comedy, which brought the shock arrival of female performers playing the roles of women on the English stage for the first time, as purely a celebratory release from puritanism – embracing ribaldry as an art form itself. The return of King Charles II from exile in France may have meant it was time to party again, but the enduring Restoration comedies are biting satires of society and its norms. As such, it is an act of both genius and sheer joy that Mike Bartlett uses the greatest hits of Restoration comedy tropes as the armature on which he builds this most modern comedy of manners.

Neither a polemic nor escapist fantasy, Scandaltown hits just the right notes to bring comfort through ridicule of the absurdity of the modern age. The premise, like its Restoration forebearers, pits virtue against vice with plenty of subterfuge and mistaken identity along the way. Phoebe Virtue (Cecilia Appiah) receives a letter from her twin brother Jack (Matthew Broome) from London and, alarmed by what decadence into which he appears to have fallen, she must set out (in disguise, of course) to find him and mend his ways. Relative newcomer Appiah creates a winning Miss Virtue, earnest and well-intentioned in a 21stcentury non-shaming, socially-conscious way. Appiah’s performance is but one example of how director Rachel O’Riordan manages to give the production both a lightness of touch — that makes all the characters both laughable and likeable — whilst dealing with the most deliberately broad material and set-ups. The plot moves at pace with plenty of belly laughs but also a sense of substance.

In the first act, we meet Secretary of State for Procurement, Matt Eton, (Richard Goulding) and Lady Susan Climber (Rachael Stirling) who are introduced by social media wunderkind Hannah Tweetwell (Aysha Kala) for mutual ascent and to serve Miss Tweetwell’s secret agenda. Stirling and Goulding’s initial introduction is hilarious and these two actors, in particular as part of an extremely formidable cast, deliver stellar performances throughout the show – gracing us with exquisite comic timing that, like much of the production, is both unapologetically silly but highly nuanced.

All aspects of this production are high quality but Kinnetia Isidore’s lush and precise costumes play a particularly central role.

Of course, pretty much every Guardian reader you know will enjoy Scandaltown. But whilst anyone who thinks there is not a second of satire to be had amongst the stylings of Michael Gove/Matt Hancock/Boris Johnson may not find every gag a laugh-aloud moment, Bartlett’s play is not a panegyric to the Left. Everyone is fair game in this show, but the tone is not snide – it’s sharp but, more essentially, it’s kind. That you can contemplate the current state of affairs without delusion and yet somehow feel better for it, is nothing short of a miracle; Scandaltown is just the elixir we need right now.

We are not virtuous, but neither are we cruel. We believe in simply: no shame.
When noble heroine Miss Phoebe Virtue receives worrisome news on Instagram that her twin brother Jack may be endangering his reputation in London Town, she decides she must visit herself, and investigate. Scandaltown is a modern restoration comedy and an irreverent satire for our times. Expect the finest couture, rakish behaviour, explicit hashtags and a party that will have all of London talking. Welcome to Scandaltown.

Following its multiple West End runs, and continuing success at its home – The Other Palace, Heathers the Musical will embark on its highly … END_OF_DOCUMENT_TOKEN_TO_BE_REPLACED