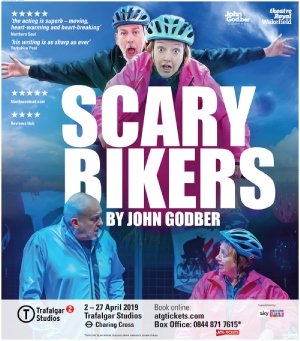 SCARY BIKERS, starring the BAFTA Award-winning duo of John Godber and Jane Thornton, makes its London debut in April 2019 at the famous Trafalgar Studios on Whitehall.

Produced by The John Godber Company and Theatre Royal Wakefield, and written and directed by Godber, SCARY BIKERS is a new comedy that was commissioned by Sky Arts in 2018 as part of their ART 50 project which explored the idea of what it is to be British in a post-Brexit world.

When retired miner Don (Godber) and former private school teacher Carol (Thornton) meet by chance after both suffering a loss, they thought they’d found a new beginning. But a bike ride through Europe would test their budding romance, and the road to love is rocky when an unstoppable force meets an immovable object.

With themes of finding love after loss and the ongoing impact of the Brexit vote, Don and Carol travel across Europe as they reconcile the past, debate the present and worry about the future.

SCARY BIKERS opens for previews at Trafalgar Studios on Tuesday 2 April 2019 and runs until Saturday 27 April 2019.

Cirque du Soleil has announced the London run for one of its most critically acclaimed touring show KURIOS— Cabinet of Curiosities. Opening on 13th … END_OF_DOCUMENT_TOKEN_TO_BE_REPLACED

Ambassador Theatre Group Productions are delighted to announce a UK and Ireland Tour of the pantomime MOTHER GOOSE. The first of its kind to tour the … END_OF_DOCUMENT_TOKEN_TO_BE_REPLACED

The National Theatre’s new musical Hex returns to the Olivier theatre for Christmas, after its original 2021 opening was delayed due to covid. The … END_OF_DOCUMENT_TOKEN_TO_BE_REPLACED