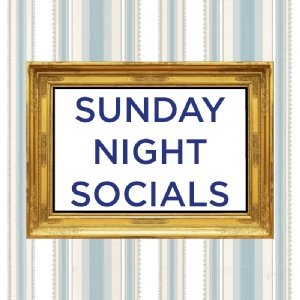 Kieran Brown, in association with Chris Matanlé and Union Theatre, has announced the 2nd season of Sunday Night Socials.

Following the huge success of their first season earlier this year, the team returns in September for another 4 evenings from Nick Barstow, Sam Thomas, Craig Christie and Mark Petty. A whole host of West End Performers will descend on the Union Theatre, London, once (sometimes twice!) a month to showcase the works of new and upcoming composers/lyricists. Each month a different creative will feature their works, performed by top performers in the industry.

Season director Kieran Brown adds “I am delighted to be able to announce the next set of Sunday Night Socials at the Union Theatre, following the sell-out success of our initial 3! The feedback from audiences has been phenomenal, and people have responded brilliantly to our relaxed, informal atmosphere, as we introduce them to the works of some of our favourite emerging composers/lyricists. We are thrilled that Nick, Sam, Craig and Mark have agreed to join us and allow us to showcase their brilliant new works, and give our audience a unique opportunity to not only hear their music (courtesy of their talented West End chums!), but also learn about their processes as they field questions from the audience, keen to hear about their how they cope with the challenges thrown at them as keen emerging talents, championing ORIGINAL British musical theatre!”

The evenings are being treated as very informal and relaxed. The bar will remain open throughout at there will be the chance to submit questions for the composer and/or performers to answer during the evening.

The season will commence on Sunday 8th September with An Evening with Nick Barstow and Friends. His evening will be a special preview of the new version of his concert season Re: Arrangement, followed by all-new songs from his musical Never Change (written with Jonathan Kirwan) sung by special guests (TBC). RE:Arrangement is a love-letter to musical theatre and the art of the melody. From Hammerstein to Hamilton and back again, prepare for mashups, gender-flips and sparkling new renditions of musical theatre classics. In this one-off evening, Nick will be presenting previously unheard new material and bringing in some new special guests to the team.

Co-conceived and directed by Kirk Jameson, whose current version of the hit film ‘Madagascar’ is touring the UK and delighting audiences and critics alike. ‘Never Change’ is a black comedy about grief, family and identity. Sarah is mid-campaign to save the local seafront from developers who wish to swoop in and rebuild – destroying the town she used to love to visit with her deceased dad Fred, and of particular concern removing the ocean-view memorial bench dedicated to him. Sarah has limited support in her endeavour from the townspeople (couldn’t care less), her mother Susan (ready for a quieter life), and her son Thom who is as desperate for change as Sarah is desperate to avoid it.

When Sarah cancels holiday plans to keep fighting the council, Thom decides to create the adventure he feels he’ll never have and leaves for France in the middle of the night, with Instagram dreams of the big wide world awaiting him. With the developers looming and her son suddenly AWOL, Sarah takes drastic action by hiring a van, digging up the bench, and with a surprisingly game Susan in tow drives off to Dover. As mother and daughter begin to reconnect with each other and Thom discovers himself, the loss of a husband, father, and grandfather that none of them have ever truly dealt with begins to rise up and show the cracks in the family plaster.

Nick Barstow is a musical director, arranger, composer and performer. His solo show ‘RE:Arrangement’, which originated at Brasserie Zedel in August 2018 and has since toured the UK with guest stars including Noel Sullivan, Caroline Sheen and Alice Fearn and is soon to headline the Stages Floating Festival alongside Alfie Boe and Sheridan Smith. He recently re-orchestrated the full score of ‘Rags’ for the show’s UK premiere, re-working the original score alongside the show’s lyricist Stephen Schwartz. Prior to that he was Musical Supervisor on Stiles and Drewe’s ‘Just So’ at the Barn Theatre in Cirencester, for which he has contributed all-new actor-musician orchestrations. Later this year his actor-musician production of ‘A Christmas Carol’, produced by Peter Brook Equity Ensemble award winners Antic Disposition, will run again in the historic Middle Temple Hall after a sell-out run in 2017.

A studio cast album will also be available, starring Brian Blessed as the Ghost of Christmas Present with further casting to be announced. He has worked extensively with the leading stars of the West-End in concert, and is currently lead arranger for newly announced supergroup ‘The Cardinals’, featuring Ramin Karimloo, Ben Forster, Celinde Schoenmaker and Carrie Hope Fletcher.

Next in the season on Sunday 6th October is newcomer Sam Thomas.
Sam is a pop/rock musical theatre songwriter. His latest works include “No Limits”, a contemporary song-cycle about life, love and letting go, and the music and lyrics for Sudden Impulse Theatre Company’s original family pantomimes – “Beauty and the Beast” & “Sleeping Beauty”.

He’s currently commissioned to write music and lyrics for the musical adaption of George Eliot’s novel, “Silas Marner”, debuting this November at the Abbey Theatre in Nuneaton. A big fan of Pasek & Paul, Scott Alan, Joey Contreras, he would love to follow in their footsteps as renowned songwriters in the musical theatre industry.

Australian composer/entrepreneur Craig Christie is up next, on a very special MONDAY edition, October 14th! Craig has worked for twenty-nine years as the principal of No Mates Productions, creating original musicals in educational, community and commercial settings.

His annual Children’s Book musicals have been seen by over 2.5 million school children internationally and currently tour Australia, New Zealand and the UK. Craig’s commercial stage musical theatre works include Crusade and Eurobeat. After winning Best New Musical and breaking box office records at the Edinburgh Festival 2007, Eurobeat went on to tour the UK culminating in an acclaimed West End season in 2008. His musical Hey Florence based on the true stories of active duty nurses has had a series of standing ovation performances in Nashville, New York and Singapore. His recent projects include the new musical Get On With It, written with London based writer Amy Golden about her life as a person with profound cerebral palsy which premiered in London in July 2016 and the much-anticipated sequel to Eurobeat – Eurobeat Moldova – that premiered at the 2016 Edinburgh Fringe Festival where it was awarded Best Musical. His current projects include a new work Journeys of Destiny in collaboration with UK dramatist Ava Hunt and the University of Derby which explores the refugee experience
Go to www.nomatesproductions.com

Completing the season, Mark Robert Petty, one-half of the Trans-Atlantic writing team of Anderson & Petty is bringing an evening of his musical collaborations on Sunday 10th November.

Bursting onto the New York cabaret scene in 2011 with a concert at The Duplex in Greenwich Village, Mark who had begun writing with Broadway actor Barry Anderson in late 2010 debuted a selection of songs from what would eventually become the album You Are Home.

In London, we would have to wait until March of 2012 for the British cabaret debut at the prestigious Delfont Room at The Prince of Wales Theatre. Further concerts have showcased these songs in New York and London on many occasions since at The St. James’s Studio (now The Other Palace), Feinstein’s 54 Below, The Actors’ Church, right here at The Union Theatre, Live at Zédel and also across many venues in Europe.

As Anderson & Petty he has released two albums to date, You Are Home and Wish which is a Holiday album of original Christmas songs.

Mark will be debuting brand new material from Anderson & Petty as well as never before heard collaborations from himself, his work with songwriter Lee Noble and a few other very notable composers with whom he is currently creating brand new songs for upcoming projects.

We will be announcing performers for this show over the coming weeks. Mark will also be looking for a Musical Theatre student to sing one of the songs to be performed on the evening. Further details on how to enter will be announced very soon.

Kieran Brown – Season Director, host and Performer
Kieran comes from Scotland and studied at the Royal Scottish Academy of Music And Drama, graduating with an honours degree in Acting. He has recently completed the European tour of Maury Yeston’s Titanic, before which he spent two years understudying and playing the role of The Phantom in The Phantom of the Opera at Her Majesty’s Theatre, London to packed houses and standing ovations. Most recently he has played the role of First Officer William Mcmaster Murdoch in Maury Yeston’s Titanic UK and International tour, as well as filming the new BBC crime drama Traces, due to air this November.

After making his West End debut in Les Misérables (Palace Theatre, London), Kieran went on to appear in numerous musical productions across Europe, playing roles such as Elphaba’s Father/Dr Dillamond/Wizard in Wicked (Apollo Victoria), The Actor in The Woman In Black (International Theatre, Vienna), Les Misérables 25th Anniversary Concert (O2 Arena, London), u/s Raoul in Love Never Dies (Adelphi Theatre), Algernon in The Importance Of Being Earnest (English Theatre, Vienna) and Love Never Dies – in Concert (Ronacher Theatre, Vienna. He also had the privilege of performing for and meeting Her Majesty Queen Elizabeth II in Edinburgh.

His solo shows have included: West End Winters (Drachengasse Theatre Vienna), Once Upon A Song (Lauderdale House and Union Theatre, London), My Big Fat MUSICAL Cabaret (London, Vienna and Glasgow) and A West End Christmas In… (Falkirk, Edinburgh, Glasgow, London, Vienna, Munich). Kieran recently wrote new lyrics for and performed the West End Wilma charity single ‘No Awards For You’ and is always in demand for recordings and workshops. He is featured on no less than 8 different albums of works by new and upcoming composers, including You Are Home – the Music of Anderson & Petty, As Long As I Have Music (Eyles & Gould), Self Taught Still Learning (Chris Passey), Love Lies & Lyrics (Lesley Ross), Words Shared With Friends (Robert Gould) and “The Barricade Boys” album.

In 2018 he appeared as one of The Three Phantoms during a sell-out run at The Parisian Theatre in Macau, and the MES Theatre Singapore. He was also recently a guest artist on the Cunard flagship Queen Mary 2, & Queen Elizabeth & Queen Victoria as one of The Barricade Boys. He appeared up and down the country this spring in The Greatest Show and with The Barricade Boys on their UK tour, and at the end of the year will set sail again on the RMS Titanic as they head to Asia as they embark on a 2020 world tour.