After one of the most divided, isolating and lonely times in global history, Summer 2021 at Shakespeare’s Globe celebrates all that unites us: story, laughter, tears, nature and of course theatre. 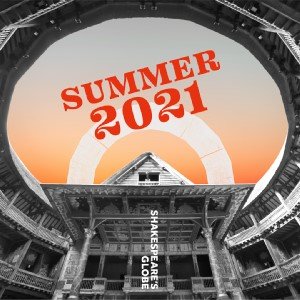 This summer we’ll celebrate the lovers and the poets, revel in the power of our strong imaginations and rediscover the wonder of theatre.

We cannot wait to open our great oak doors once again and welcome you, our audience, safely back into our unique spaces for what promises to be a season of love, life and catharsis.

A MIDSUMMER NIGHT’S DREAM
Get ready for a fiesta like no other as our ★★★★ (The Times, The Stage) raucous 2019 production of Shakespeare’s A Midsummer Night’s Dream returns with piñatas, streamers, glitter and a cacophony of brass.

Four love-drunk teens, escaped from the confines of an oppressive regime, caught in a dispute of increasingly magical proportions. A posse of wannabe actors determined to put on a play against the odds. The Fairy Queen and King at war, and one wild spirit hell-bent on causing as much havoc as possible.

What could possibly go wrong?

Our joyful explosion of vivid chaos welcomes you back to our wooden ‘O’ with direction by Globe Associate Artistic Director Sean Holmes and music from Jim Fortune, performed by members of the Hackney Colliery Band.

A Midsummer Night’s Dream and Twelfth Night will be created and performed by the same ensemble.

This production is specially made to be enjoyed by young and old alike.

I have had a most rare vision. I had a dream, past the wit of man to say what dream it was.
Act IV, scene 1

ROMEO & JULIET
From historic feud to ill-fated union, Shakespeare’s Romeo & Juliet speaks of chance, destiny and fortune, and after some of the most fractious years in recent history, this universal tale finds new significance in 2021.
Romeo and Juliet fall in love. Romeo and Juliet die. It’s not a spoiler. It’s written in the stars. Final. Finite. But what if it isn’t?
Director Ola Ince (Appropriate, Donmar Warehouse) makes her Globe debut directing Shakespeare’s timeless tragedy with Alfred Enoch (Red, West End) and Rebekah Murrell (Scenes with girls, Royal Court0 as the ‘star-crossed lovers’.

#RomeoAndJuliet
My only love sprung from my only hate,
Too early seen unknown, and known too late!
Prodigious birth of love is it to me
That I must love a loathed enemy.
– Act I, scene 5

Illyria is a society in limbo, held captive by loss. Until a sea-drenched stranger arrives and unexpectedly unleashes the chaotic and transformative power of love.
Wild, surprising, fierce and funny, this fiery new production is directed by Globe Associate Artistic Director Sean Holmes and is infused with the mesmeric nostalgia and soulful music of the world of Americana.
Twelfth Night and A Midsummer Night’s Dream will be created and performed by the same ensemble.

If this were played upon a stage now, I could condemn it as an improbable fiction.
– Act III, Scene 4

METAMORPHOSES
Metamorphoses is a playful new piece of theatre inspired by Ovid’s powerful collection of myths, written bespoke to our candlelit Sam Wanamaker Playhouse by the Globe’s first writers-in-residence in nearly four centuries.

A hundred props. Four actors. One theatre. And you, the audience.
Strap in for a rollercoaster of epic impossibilities.

From the everyday to the astonishing, and the ordinary to the unimaginable, Ovid’s stories explore the power of transformation, the resilience of humans and the wonder of life. They were a great inspiration to Shakespeare and over 2000 years later, are reimagined for our world now. Expect anarchy, shape shifting and a burning chariot of fire.

Sami, Laura and Sabrina became the Globe’s resident writers with the introduction of our Scriptorium programme in 2019. The twelve-month residency saw the writers develop ideas and work bespoke to both of our theatre spaces. Metamorphoses marks the culmination of these three wonderful playwrights’ time with us.

‘We are here to make sense of it all’.
Content guidance: Contains strong language and themes of violence and sexual assault.

AS YOU LIKE IT
Shakespeare’s As You Like It runs the glorious gamut of romance and poetry, satire and slapstick.
A tale of sibling rivalry, exile, cross-dressing, and misplaced love, it takes travelling to the Forest of Arden for friendships to be formed, and families and lovers to be reunited.

#AsYouLikeIt
‘We that are true lovers run into strange capers’
— Act II, scene 4

THE TEMPEST
Inspired by Elizabethan reports of the West Indies in the 16th Century and imbued with a spirit of magic and superstition, The Tempest is Shakespeare’s tumultuous play of betrayal, love and forgiveness.
Set on a remote and mysterious desert island, a banished father must relinquish control and release his daughter in order for her, and for him, to grow, love and understand this brave new world.

With enchantments and treachery at every turn, will anyone ever escape?
#TheTempest

‘Be not afeard, the isle is full of noises,
Sounds, and sweet airs, that give delight and hurt not.’
— Act III, scene 2

AUDIENCE CHOICE
What’s it like to go to the theatre and not know what you’re going to see?
Across the summer and for three performances only, it will be up to you to vote for which of our plays the Globe Touring Ensemble delivers that day.

Actors call it ‘terrifying’, audiences say it’s exhilarating. So wave your arms and stomp your feet as much as you can for the play you want to see, and blow the (figurative) roof off the Globe Theatre.
The rules are simple: you decide.
#AudienceChoice

Theseus:
‘What revels are in hand? Is there no play
To ease the anguish of a torturing hour?’

Philostrate:
‘Make choice of which your highness will see first.’
– A Midsummer Night’s Dream

New dates are announced today for the return of Agatha Christie’s Witness for the Prosecution at London County Hall on the Southbank. As the … END_OF_DOCUMENT_TOKEN_TO_BE_REPLACED

5North and Ellie Keel Productions’ Written on the Waves, a series of world premiere audio plays – the penultimate play, and first for a family … END_OF_DOCUMENT_TOKEN_TO_BE_REPLACED

Sonia Friedman Productions announces the dates for the RE:EMERGE season as priority booking opens on 15 April at 10.30am, with public booking opening … END_OF_DOCUMENT_TOKEN_TO_BE_REPLACED

Disney Theatrical Productions today announces that Frozen is back on sale to the public, opening at the newly refurbished Theatre Royal Drury Lane on … END_OF_DOCUMENT_TOKEN_TO_BE_REPLACED