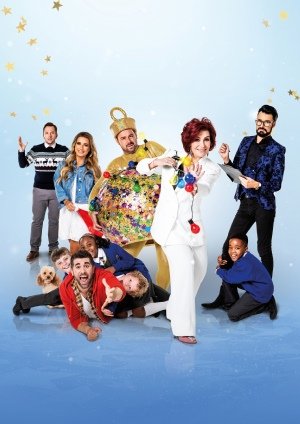 The highly acclaimed ‘NATIVITY! THE MUSICAL’ is back for a third year in London and the producers of the smash-hit show are thrilled to announce the fabulous Sharon Osbourne will be joining the company as ‘President of Parker Pictures’.

Sharon will be starring as ‘Crystal Collins’ – the mother in law to ‘Harry Parker’ who will be played by the inimitable Danny Dyer. Danny is back by popular demand as ‘The Hollywood Producer’ following a roaringly successful Christmas season at the Eventim Apollo last year.

His daughter and winner of ‘Love Island’ 2018 Dani Dyer also returns as ‘Polly Parker’. Completing the star-studded line up is the previously announced Rylan Clark-Neal who will play ‘The Critic’ and Simon Lipkin who will reprise his role as the hilarious ‘Mr Poppy’ for a third year after critical and audience acclaim.

Producer Jamie Wilson said today, ‘Nativity! The Musical has been delighting audiences in London and the U.K since 2017 and we are incredibly proud of our show. We are thrilled with this years’ cast and we can’t wait to see Sharon Osbourne and Danny Dyer on stage together in London’.

They will be joined by Scott Garnham as ‘Mr Maddens’ and Ashleigh Gray as ‘Jennifer Lore’ who both return for a second year.

Completing the cast will be Jonathan Bourne as ‘Lord Mayor’, Charles Brunton as ‘Mr Shakespeare’, Jamie Chapman as ‘Patrick Burns’ and Penelope Woodman as ‘Mrs Bevan’. They will be joined by Dawn Buckland, Connor Ewing, Kade Ferraiolo, Amy Oxley, Helena Pipe and Billy Roberts. They will play all U.K venues and London.

Sharon Osbourne made her UK theatre debut in ‘Vagina Monologues’ in 2006 and ‘Nativity! The Musical’ will mark Sharon’s second appearance on a UK stage. She has worked in the music industry for over 40 years, managing many artists including her husband Ozzy Osbourne and Black Sabbath. Her television career first started when she created and produced the reality series ‘The Osbournes’ which won an Emmy Award for Best Reality Show in 2002. She then leveraged her lengthy professional career in the music industry to become a talent judge on the hit UK version of ITV’S ‘The X Factor’ for a total of seven seasons. She later served as a talent judge for five seasons on ‘America’s Got Talent’. Sharon is currently the host of

Danny Dyer is best known for his role as ‘Mick Carter’ in BBC one’s ‘EastEnders’. Danny has won many awards for his role including ‘Best Soap Actor’ at ‘TV Choice Awards’ and has previously won a ‘National Television Award’ in 2015 and in 2016 for ‘Best Serial Drama Performance’. Danny’s breakthrough role was in cult 90s film ‘Human Traffic’, his other film credits include ‘The Business’ and ‘The Football Factory’. Danny’s previous stage credits Include, ‘Kurt and Sid’ at the Trafalgar Studios, ‘No Man’s Land’ at The National Theatre, ‘Celebration’, ‘Certain Young Men’ and ‘The Homecoming, all at The Almeida Theatre. Danny most recently starred in the Harold Pinter Season in the ‘Dumb Waiter’ alongside Martin Freeman.

After making her stage debut in ‘Nativity! The Musical’ last year, Dani Dyer returns in the role of ‘Polly Parker’. Dani is best known for winning the 2018 series of ITV’s ‘Love Island’. Since winning ‘Love Island’ Dani has gone on to achieve great success in the fields of fashion, television, books and beauty and has been co-hosting ‘Capital Weekend Breakfast’ alongside presenter Rob Howard. Dani will be back on TV screens in the autumn 2019 as the host of yet-to-be-announced TV series.

Scott Garnham’s previous theatre credits include the UK Tour of ‘Billy Elliot The Musical’ and the West End productions of ‘Les Misérables’ at the Queen’s Theatre and ‘I Can’t Sing’ at the London Palladium. Scott returns as ‘Mr Maddens’ in ‘Nativity! The Musical’ after delighting audiences on tour and in London in 2018.

Ashleigh Gray is best known for playing the leading role of ‘Elphaba’ in ‘Wicked’ in the West End and on UK Tour. Her other theatre credits include ‘Vanities’ and ‘Cool Rider’ both in London. Ashleigh returns as Jennifer Lore in ‘Nativity! The Musical’ for a second year.

Every child in every school has one Christmas wish, to star in a Nativity, and at St Bernadette’s School they’ve decided to mount a musical version! Join teacher Mr Maddens and his crazy assistant Mr Poppy as they struggle with hilarious children, and a whole lot of sparkle and shine to make everyone’s Christmas wish come true. Featuring all of your favourite sing-a-long songs from the smash-hit films including Sparkle and Shine, Nazareth and One Night One Moment. NATIVITY! THE MUSICAL promises to be the perfect feel-good comedy for all the family.

Written and Directed by Debbie Isitt with music and lyrics by Nicky Ager and Debbie Isitt, NATIVITY! THE MUSICAL is choreographed by Andrew Wright, designed by David Woodhead, with lighting design by Tim Mitchell, sound design by Tom Marshall and musical supervision and orchestrations by George Dyer.

NATIVITY! THE MUSICAL will first open at the Wolverhampton Grand on 29 October and will then visit, Aylesbury Theatre, Canterbury Marlowe Theatre, Cardiff Millennium Centre, Plymouth Theatre Royal, Mayflower Theatre Southampton finishing with a run at the London, Eventim Apollo from 11-29 December.