Following last year’s successful run of Ruth and The Dark Lady of the Sonnet, Pegasus Opera Company presents another outstanding opera double bill titled Shaw Goes Wilde. The productions are based on Oscar Wilde’s The Nightingale and The Rose and George Bernard Shaw’s The Music Cure. The two one-act operas will be performed on Friday 12th, Saturday 13th at 7.30pm and Sunday 14th April at 2.30pm at the new Susie Sainsbury Theatre, Royal Academy of Music, London. Shaw Goes Wilde is composed and conducted by Philip Hagemann and directed by Louise Bakker. 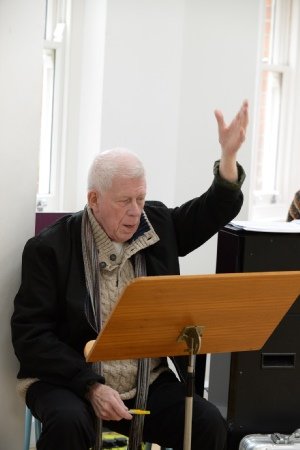 Philip Hagemann
One of the first things you notice about the extremely talented composer and conductor Philip Hagemann is the passion that comes from within him when he is talking about his work in the Opera. Philip told me with affection that he first met Alison (Buchanan) in Wexford, Ireland after seeing her performing in an Opera. It was soon after then she moved back to New York where he lives and they have been friends now for over 15 years.

Q: What inspires your work?
Philip: Most of my operas are based on pre-existing literary works. I have composed five operas based on Shaw’s plays — four one-act and one full-length operas. Last year, Pegasus presented The Dark Lady of the Sonnets and, now, The Music Cure. The Music Cure was my first Shaw opera, composed in 1984. This whetted my interest in setting more of his plays to music. By the way, The Music Cure has been performed in many colleges. I read Wilde’s book The Happy Prince and loved his stories, none more than The Nightingale and the Rose. The idea of such sacrifice for love truly moved me. But, I had to end it on a more positive note as I felt it should demonstrate hope for the future. I hope our audiences enjoy both.

Q: How many opera’s have you composed?
Philip: In my career, I have composed two full-length operas and ten one-act operas. With new operas rarely getting more than one performance, I am extremely appreciative to have this produced, especially by Pegasus Opera. It was such a pleasure working with them last year and the enjoyment continues.

Q: Do you always write all your operas in English?
Philip: Yes, I do. Which from the audience’s perspective is nice for them to understand the storyline. However, I make sure it is written in a way to enable the singers to be able to pronounce clearly some of the words they sing which can be quite tricky. Otherwise, at times it has sounded jumbled and hasn’t translated properly. I am very pleased with the excellent diction of our artists during the rehearsal period.

Q: Do you have any pre-show rituals?
Philip: No, I like to make sure I am well prepared. But I have never had any rituals though.

Q: How large is the orchestra you are performing with for this opera?
Philip: There is going to be an orchestra of 13 that I am conducting on this occasion. Although some of my pieces require larger ones.

Louise Bakker
Director Louise Bakker was completely at ease talking to me about why she became involved with Pegasus, her vision and what it is like working alongside Alison, Phil and the Pegasus team. With only 6 and a half days of rehearsals available for this performance to be ready for opening night, Louise appeared in very good humour and calm about the task that lay ahead of her and the rest of the Pegasus Company.

Q: How long have you been involved with Pegasus?
Louise: I got involved about 10 months ago. I initially wrote to Alison to say I was very keen to work with the company, then I met her and Philip and we all felt really positive about collaborating together and it went from there…

Q: What does it mean to you to be involved with a BAME company?
Louise: Not everyone who’s involved in the show is BAME… indeed, Pegasus’ motto is “harmony in diversity”. We’re a diverse group of people who want to make something beautiful together, something of value for an audience. But actually, opera’s one of the most interesting art forms in which to be exploring privilege, equality and opportunity because of its reputation for being fancy and exclusive. The company works incredibly hard to help people from minority ethnic groups and underprivileged backgrounds to enjoy and participate in opera – I’m very glad to be part of that.

Q: Are you planning to continue working with Pegasus?
Louise: That depends entirely on whether they’ll have me back! Obviously, I’d love to! Alison does a marvellous job of leading the company – it’s great (and rare!) to have a female Artistic Director and she juggles so many things to make the company work… it’s really impressive.

Q: How have you found working with Alison and Philip?
Louise: Wonderful. A lot of trust, respect, and we all want to create a beautiful production so we’re united in that vision and ambition.

Q: Are you used to working under such a short amount of rehearsal time?
Louise: Every production is different, with rehearsal periods getting shorter across the industry due to work being so expensive to produce. In the Pegasus company, I have such a proficient team of performers that they pick everything up without batting an eyelid. The production and creative teams are equally as brilliant at not just getting the job done under tight conditions, but keeping our standards as high as we possibly can.

Q: If you were to continue working with Pegasus. What would you like to bring to the company to raise its profile further?
Louise: The company desperately need more funding, in particular for a full-time member of administrative staff. Without that crucial structure to build around, it can’t grow… That’s not a very sexy answer, but it’s an honest one!

Alison Buchanan
Q: What was the personal background of Lloyd Newton for deciding to start Pegasus?
Alison: Lloyd was a tenor who found it hard to find work. While participating in the critically acclaimed production of Porgy & Bess at Glyndebourne Opera. Lloyd met many British black singers who also found it hard to get work in general. So he decided to start a company that would address this imbalance and provide opportunities for singers of colour.

Q: How many BAME performers do you estimate have been through Pegasus?
Alison: I would say the majority of classically trained singers in the UK have had some dealing with Pegasus over the 27 years that the company has been in existence, unless they are quite young of course then they may not have, but we continue to keep an eye out for up and coming artists. Of course, there are exceptions.

Q: What other productions do you do besides Opera?
Alison: Apart from the opera productions we also produce concerts, education work, community outreach and hire singers for those projects. Extending our working shills across the arts industry.

Q: Why did you decide to work with director Louise Bakker?
Alison: I Love Louise. She had been introduced to us last year. I loved that she was a young, up and coming, vibrant female director. The producers of the show also fell in love with her when they met her. Last year we had used a male director. We feel it is important to change each time and bring new fresh input and ideas into our work.

Q: Watching your body language do you consciously internalize the music as you perform?
Alison: Once I am comfortable with the music I try to let the music dictate my direction. I never really plot things out, I try to connect with the text and the emotion, sometimes it comes easily other times not so much. I always try to be honest in my delivery. In opera, of course, the director will often dictate where you should be when in that case it may not feel so organic but it is important that we find the way to internalize and make it as natural as possible.

Q: How and when did you first meet Lloyd?
Alison: I met Lloyd Newton in 1986 the first year we performed Porgy & Bess at Glyndebourne. Trevor Nunn our director put us all into family groups and Lloyd was my brother in law in my family dynamic. He called me ‘Sis’ from that time.

Q: When did Lloyd die and you then took over his legacy?
Alison: He died in 2016. His death was a big blow to the company and myself. Before he died from his cancer he would tell me he wanted me to run Pegasus when he went. I had always refused him ‘no way I would say’. So it was a shock to me that he put in his will anyway that he wanted me to run Pegasus. I felt I could not refuse that! Thankfully he worked with Sonia Hyams at that time who had been his project manager and helped me with keeping Pegasus going. Sonia is still with the company as an executive director and we also have some really nice board members who helped me a lot while I found my feet.

Q: What is your vision for the future moving Pegasus forward?
Alison: We need to take one man’s vision and institutionalize it. We build a lasting, sustainable legacy. I see Pegasus continuing to be at the forefront of opera that is multicultural ‘harmony in diversity!’I would like to do some new takes on well-known operas, be a champion of opera and other music by composers of the black diaspora, to commission new works, to support and nurture upcoming and current BAME Artists. To continue our amazing education and outreach work with the community, to take more performances on tour, to continue inspiring and empower through music. In all honesty, the list is endless!

The first act is The Nightingale and the Rose features themes of love and rejection. Oscar Wilde’s bittersweet production sees a student who falls for a young maiden, who demands the student show his feelings by giving her a red rose. Unable to find one, a nightingale offers to make a red rose for him. The production stars celebrated soprano Alison Buchanan, award-winning baritone Peter Brathwaite (Effigies of Wickedness at Gate Theatre), Oliver Brignall, Thomas Bennett, Angela Caesar (Caroline or Change at Playhouse Theatre), Katie Grosset, Amal Khalidi and Nick Morton. The second act is The Music Cure, a satirical comedy set in the 1900s, which sees Lord Reginald being investigated by Parliament for insider trading. This unwanted scrutiny makes the Lord depressed, so his beloved mother hires a famous, dynamic female concert pianist to cheer him up. This tale of love, desire and corruption is played out with outstanding, specially adapted music. The Music Cure stars Alison Buchanan, Peter Brathwaite and Oliver Brignall.

Both productions have been adapted by composer and conductor Philip Hagemann who first collaborated with Pegasus Opera Company in 2018. Shaw Goes Wilde is a unique opportunity to showcase two British iconic Irish playwrights and present a diverse cast and creative team in a brand new venue in London – namely the Susie Sainsbury Theatre, part of the Royal Academy of Music.

Sonia Friedman Productions has announced that Ruth Wilson will star in Ivo van Hove’s adaptation of Jean Cocteau’s The Human Voice, which he also … END_OF_DOCUMENT_TOKEN_TO_BE_REPLACED

The award-winning smash-hit production of Girl From The North Country, written and directed by celebrated playwright Conor McPherson (The Weir, The … END_OF_DOCUMENT_TOKEN_TO_BE_REPLACED

John Barrowman is back on tour with his new show ‘I am What I am’ The tour launches on Saturday 30 April, 2022 at Southend‘s Cliff’s Pavilion and … END_OF_DOCUMENT_TOKEN_TO_BE_REPLACED

Producer Karl Sydow has announced the West End return of a dazzlingly renewed version of Dirty Dancing - The Classic Story On Stage, following a … END_OF_DOCUMENT_TOKEN_TO_BE_REPLACED