Nordic Musical Partners presents the world premiere in Denmark in March 2022 before a Scandinavian tour. 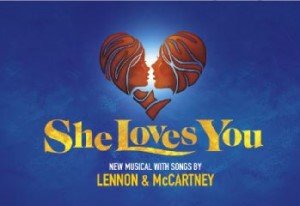 Led by an acclaimed international creative team, She Loves You is a brand new musical in development based on the beloved Lennon & McCartney song catalogue.

Presented by Danish producer Mikkel Rønnow and Nordic Musical Partners, the production will have its world premiere in March 2022 at the Tivoli Gardens in Copenhagen, starring Danish singer and actress Maria Lucia (The Beauty and the Beast, The Sound of Music on stage and the Danish film dubbing of Disney’s Frozen) leading a cast of 24 musical performers. This production with Danish dialogue and English-language songs, will transfer to the Musikhuset in Aarhus before launching a Scandinavian tour of Sweden, Norway and Iceland, with several worldwide productions still in the pipeline.

An original book, She Loves You revolves around a modern family and their complex and contemporary journey with love: the naïve, young, infatuating love, the long-term established love compelled by children and careers and the lifelong, enduring and ultimate love, flourishing in later life.

In collaboration with Sony Music Publishing Scandinavia, the production will feature more than 40 of John Lennon & Paul McCartney’s beloved hits from The Beatles years 1963-1970 including Let It Be, She Loves You, Blackbird, A Hard Day’s Night, With a Little Help From My Friends, Help!, The Long and Winding Road and Across the Universe.

She Loves You will be directed by Multi-award-winning British theatre director Thom Southerland (Titanic The Musical, Harold and Maude and Southwark Playhouse productions of Parade, Grand Hotel and Mack and Mabel). Southerland also co-wrote the book alongside Shaun McKenna (stage adaptations of Ladies in Lavender and Peter James’ novels A Perfect Murder, Dead Simple and Looking Good Dead) with adaptations by Jokum Rohde (Ivanhoe, Thor and recently The Carnival Murder).

The unmistakable catalogue of Lennon & McCartney classic hits will be underscored and orchestrated for a 16-piece orchestra by Grammy Award-winning Steve Sidwell, known for his standout collaborations with Robbie Williams and his orchestrations of Beautiful, the Carol King musical. Musical supervision will be by Mikkel Rønnow.

News on further international productions will be announced in due course.
https://www.shelovesyou.dk/

New dates are announced today for the return of Agatha Christie’s Witness for the Prosecution at London County Hall on the Southbank. As the … END_OF_DOCUMENT_TOKEN_TO_BE_REPLACED

5North and Ellie Keel Productions’ Written on the Waves, a series of world premiere audio plays – the penultimate play, and first for a family … END_OF_DOCUMENT_TOKEN_TO_BE_REPLACED

Sonia Friedman Productions announces the dates for the RE:EMERGE season as priority booking opens on 15 April at 10.30am, with public booking opening … END_OF_DOCUMENT_TOKEN_TO_BE_REPLACED

Disney Theatrical Productions today announces that Frozen is back on sale to the public, opening at the newly refurbished Theatre Royal Drury Lane on … END_OF_DOCUMENT_TOKEN_TO_BE_REPLACED