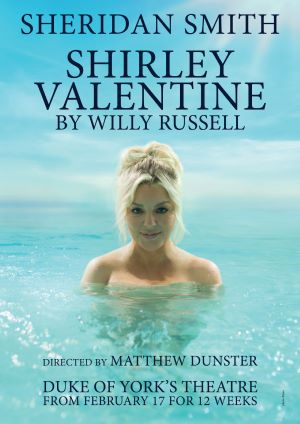 Shirley Valentine is the joyous, life-affirming story of the woman who got lost in marriage and motherhood, the woman who wound up talking to the kitchen wall whilst cooking her husband’s chips and egg. But Shirley still has a secret dream. And in her bag, an airline ticket. One day she may just leave a note, saying: ‘Gone! Gone to Greece.’

Shirley Valentine is the celebrated one-woman play written by Willy Russell, winning him his third Olivier Award. Sheridan Smith is a multi-award-winning actress with two Olivier Awards and a BAFTA. Matthew Dunster is a three-time Olivier Award nominated director whose work most recently has been seen on Broadway with Martin McDonagh’s Hangmen and in the West End with 2.22 by Danny Robins at the Criterion Theatre.

David Pugh, the five-time Olivier Award-winning and Two-time Tony Award winning Producer said: “Back in 1986 I was lucky enough to see the first ever production of Shirley Valentine in Liverpool. I have begged Willy to one day let me produce a revival of Shirley Valentine when the casting was right. That day is now and both Willy and I believe that Sheridan Smith is the perfect Shirley Valentine.”

Sheridan Smith said “As a mum now myself I’m delighted to be playing theatre’s best-loved mum and I am honoured to be entrusted by Willy Russell to bring his Shirley to life once again in the West End. Now, to practice cooking chips and egg!”

SHERIDAN SMITH is an award-winning stage and screen actress, whose acclaimed West End credits include playing Elle Woods in Legally Blonde at the Savoy Theatre and Doris in Flare Path at Theatre Royal Haymarket, both roles garnering her Olivier Awards, and the latter the Evening Standard Award as Best Actress. She received further Olivier nominations for her performance as Audrey in Little Shop of Horrors at the Menier Chocolate Factory and Duke of York’s Theatre, and Fanny Brice in Funny Girl at the Savoy Theatre. Other notable performances include Hedda Gabler at The Old Vic, Titania in A Midsummer Night’s Dream at the Noel Coward Theatre, the Narrator in Joseph and the Amazing Technicolor Dreamcoat at the London Palladium, and her stage debut as Little Red Riding Hood in Into the Woods at the Donmar Warehouse. Amongst her prolific screen roles, Sheridan was Emmy-nominated and won a BAFTA as Mrs Biggs, and further BAFTA-nominated for The C Word and her titular role in Cilla, for which she was also Emmy-nominated. Big screen credits include Dustin Hoffman’s Quartet and most recently The Railway Children Return. She has released two albums, titled Sheridan and A Northern Soul, resulting in two Classic BRIT Award nominations.

WILLY RUSSELL is the multi-award-winning writer whose career spans over five decades. His plays and screenplays include Educating Rita, Shirley Valentine and the musical phenomenon Blood Brothers. Never a day goes by when something written by Willy Russell is not being performed somewhere around the world. willyrussell.com

MATTHEW DUNSTER is a theatre and film director and writer. He was born and raised in Oldham and now lives in South-east London. Previously an actor, he has directed or written over sixty shows, often with major national companies including RSC, NT, Royal Court, Young Vic, Royal Exchange, Shakespeare’s Globe, The Bridge, as well as directing on the West End, Broadway and internationally. He has been the Associate Director of The Young Vic and Shakespeare’s Globe. His most recent productions are 2:22 A Ghost Story which has been running in the West End since August 2021, and A Midsummer Night’s Dream, the inaugural Shakespeare production at the new Shakespeare North Playhouse.

SHIRLEY VALENTINE is written by Willy Russell, directed by Matthew Dunster, designed by Paul Wills, with lighting design by Lucy Carter, sound design by Ian Dickinson for Autograph and is produced by David Pugh.

Following its multiple West End runs, and continuing success at its home – The Other Palace, Heathers the Musical will embark on its highly … END_OF_DOCUMENT_TOKEN_TO_BE_REPLACED

After creating the “absorbing and provocative” Version 2.0 and the “eminently lovable” Letters, Kashyap Raja returns to London with his new play Earth … END_OF_DOCUMENT_TOKEN_TO_BE_REPLACED