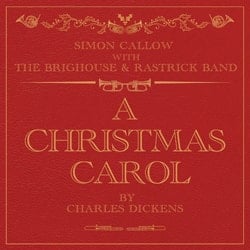 On 1 December 2017, Island Records will mark the 175 anniversary of Charles Dickens’ immortal classic ‘A Christmas Carol’ as celebrated actor Simon Callow and current national brass band champions The Brighouse and Rastrick Band join forces to release a very special album this Christmas. The CD will combine Simon Callow’s acclaimed adaptation of Charles Dickens’ ‘A Christmas Carol’ together with traditional Christmas carols performed by The Brighouse and Rastrick Band.

Originally self-published by Dickens in 1843, his legendary Christmas tale is now beautifully and dramatically presented afresh by using music to enhance Simon Callow’s superb narration on CD one. A second CD features all of the well-loved full-length Christmas carols performed by The Brighouse and Rastrick Band. The album includes Silent Night, Away In A Manger and O Come All Ye Faithful to name just a few.

In December 2016 Simon Callow performed a one-man version of ‘A Christmas Carol’ at the Arts Theatre. Directed by Tom Cairns, Simon’s performance was critically praised for its heart-warming and deeply moving festive storytelling of one of the most beloved works in literature, which has become a festive staple for many generations. Now, Simon Callow has taken his theatrical extravaganza adaptation and tells the famous story of Ebeneezer Scrooge for listeners to enjoy on CD this holiday season on his debut Christmas album.

Simon Callow said: “Charles Dickens is one of the supreme storytellers of all time; it’s always been a joy for me to perform not just the characters and the dialogue but to speak in the uniquely compelling voice of the author himself. It’s been wonderful to come back again, for new listeners and to old, to the timeless place in all our hearts that ‘A Christmas Carol’ occupies, this time with the addition of marvellously stirring music to accompany what is a  story that will never cease to be relevant, moving and funny for as long as stories are told.”

Simon Callow has always had a strong passion for Charles Dickens, having published a biography of him in 2012, along with achieving major success for his performance in The Mystery of Charles Dickens (West End and Broadway) and his portrayal as Dickens himself in BBC’s Doctor Who. Some of Simon Callow’s other well-recognised work includes his performances in Four Weddings and a Funeral, Shakespeare in Love and Amadeus. Callow followed in the footsteps of Dickens himself by performing A Christmas Carol to live audiences. Charles Dickens originally brought the classic direct to audiences himself, performing the work live 128 times before he died.

Formed over 130 years ago, The Brighouse and Rastrick Band are considered one of the great premier brass bands having just been crowned National Brass Band Champions of Great Britain. Today they are supported through fundraising efforts and subscription payments by the general public, taking pride in their reputation on being financially independent as well as having a formidable, first-class reputation for their entertaining performances.

Simon Callow’s adaptation of ‘A Christmas Carol’ will be released on 1st December 2017.


TRACK LISTING
CD 1
1. STAVE 1 – Marley’s Ghost
God Rest Ye Merry Gentlemen
The Angel Gabriel
2. Once upon a time
Good King Wenceslas
It Came Upon A Midnight Clear
3. While all this was going on
Silent Night
4. Now, it is a fact that there was nothing at all particular about the knocker
5. STAVE 2 – The First Of The Three Spirits
O Little Town Of Bethlehem
Ding Dong Merrily
The First Nowell
The Holly And The Ivy
6. Come on. Quick! my time grows short
The Angel Gabriel
7. Scrooge was abruptly conscious of being exhausted
STAVE 3 – The Second Of The Three Spirits
In Dulce Jubilo
The Sussex Carol
While Shepherds Watched Their Flocks By Night
8. Bob said he didn’t believe there ever was such a goose cooked
Hark The Herald Angels Sing
9. It was a great surprise to Scrooge
10. The time is drawing near
STAVE 4 – The Last Of The Spirits
Coventry Carol
11. They entered the city
Good King Wenceslas
12. The scene disappeared
In The Bleak Midwinter
13. STAVE 5 – The End Of It
Joy To The World
The First Nowell
14. Then he turned his steps towards his nephew’s house
15. He was early at the office next morning
Silent Night
God Rest Ye Merry Gentlemen

CD 2
1. God Rest Ye Merry Gentlemen
2. Silent Night
3. Good King Wenceslas
4. In Dulci Jubilo
5. Away in A Manger
6. The Holy And The Ivy
7. O Little Town Of Bethlehem
8. It Came Upon A Midnight Clear
9. While Shepherds Watched Their Flocks By Night
10. The Angel Gabriel
11. O Come All Ye Faithful
12. Ding Dong Merrily On High
13. Sussex Carol
14. Hark The Herald Angels Sing
15. Coventry Carol
16. The First Nowell
17. Once in Royal David’s City
18. In The Bleak Midwinter
19. Joy To The World

Adapted from Susan Hill’s classic book, The Woman in Black at the Fortune Theatre has been thrilling London audiences since 1989. In The Woman … END_OF_DOCUMENT_TOKEN_TO_BE_REPLACED

The producers of the multi-award-winning, critically acclaimed production of CABARET at the KIT KAT CLUB in London’s West End are thrilled to announce … END_OF_DOCUMENT_TOKEN_TO_BE_REPLACED

With well over three thousand productions at the Edinburgh Festival Fringe 2022, here’s my attempt at a list of recommendations. I Wish My Life … END_OF_DOCUMENT_TOKEN_TO_BE_REPLACED