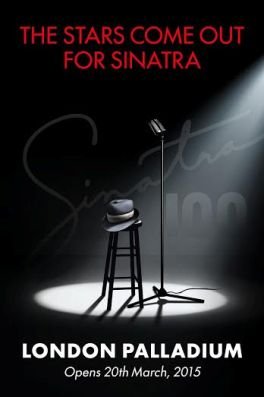 He was known by many names throughout his illustrious career in music, film and TV… ‘Bones’, ‘No Hips’, ‘Skinny’, ‘Francis Albert’, ‘The Chairman of The Board’ and ‘Ole Blue Eyes’. But one name has entered showbusiness legend – SINATRA.

2015 marks the 100th anniversary of the birth of Francis Albert ‘Frank’ Sinatra and to celebrate this momentous occasion, The Ministry of Entertainment Ltd is presenting the world premiere of SINATRA 100, five unforgettable weeks of amazing performances by the biggest stars in the world, at the London Palladium, the world famous iconic venue where Frank Sinatra made his British singing debut in 1950.

SINATRA 100 is a series of glittering star-packed concerts with a rotating bill of A-list international guest artists appearing alongside and duetting with Richard Shelton, one of the world’s finest Sinatra interpreters. The amazing line-up is completed with the cream of West End performers, the world’s biggest Big Band and Sinatra’s own rhythm section.

SINATRA 100 will open on Friday 20 March and run to Saturday 25 April.

The show’s producers have been travelling the world to sign up the greatest living exponents of popular song, many of whom performed with Sinatra himself. Most of these artists regularly fill arenas, but such is their love for the man and his music that they have readily agreed to join the celebrations and give their own fans an opportunity to get ‘up close and personal’ with them at the amazingly intimate auditorium of the London Palladium.

The full line-up of special guest artists will be announced soon.

Richard Shelton performed as Frank Sinatra in the West End in Rat Pack Confidential, a stunning performance that saw him nominated Best Actor in a Leading Role in the Manchester Evening News Theatre Awards. He has also performed in front of the Royal Family at Windsor and Prince Albert in Monaco. This week he sold out the Cadogan Hall starring in SINATRA: The Main Event, a 40th anniversary recreation of Sinatra’s The Main Event concert, at New York’s Madison Square Garden on October 13, 1974 – billed as the greatest comeback in history.

Frank Sinatra, recipient of 11 Grammy Awards and one of the biggest-selling artists of all time with sales of 150 million records worldwide, has an unprecedented three stars on the Hollywood Walk of Fame, for his work in film, TV and music. He first topped the bill at the London Palladium in 1950, supported by the famous sand dance variety act, Wilson, Keppel and Betty, and comedian Max Wall. He returned to the Palladium in 1975 for 10 shows supported by jazz legend Sarah Vaughan and Count Basie.