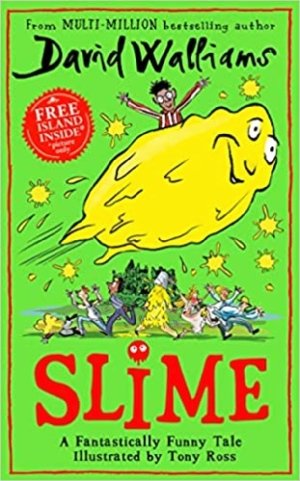 WELCOME TO THE ISLE OF MULCH…
This little island is home to a large number of horrible grown-ups. The school, the local park, the toy shop and even the island’s ice-cream van are all run by awful adults who like nothing more than making children miserable. And the island is owned by the most awful one of all – Aunt Greta Greed!

Something needs to be done about them.

But who could be brave enough?

Meet Ned – an extraordinary boy with a special power. SLIMEPOWER!

But did you know that David Walliams is the biggest-selling children’s author to have started writing since the year 2000? Not only that, but you can also read his books in over fifty-three languages, and he’s sold over thirty-five million worldwide! That’s a whole lot of kids, just like you, laughing their pants off around the world.

Tony Ross is a British illustrator and author of children’s picture books. In Britain, he is probably best known for writing and illustrating his Little Princess books and for illustrating the Horrid Henry series by Francesca Simon, both of which have become TV series based on his artwork. As well as illustrating David Walliams’ books.