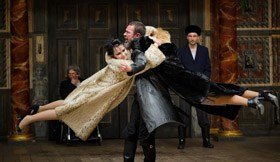 Staging A Revolution: performances and discussions in underground locations & at the Young Vic from 2-14 November 2015.

2015 marks the tenth anniversary of Belarus Free Theatre (BFT), the radical underground theatre company founded under Europe’s last surviving dictatorship. Described in May 2015 by The New York Times as, “one of the bravest and most inspired underground troupes on the planet”, BFT has brought audiences some of the world’s most provocative theatre – more than 40 new productions performed in over 30 countries across the globe over the past decade.

Staging A Revolution
From 2-14 November, Belarus Free Theatre will present a two-week Festival of performances and discussions in London featuring some of their most acclaimed original productions, reinvigorated classics and the world premiere of a new work, Time of Women. From 2-8 November, these performances will be staged in undisclosed and underground locations to encourage audiences to reflect on how the Company operate in Belarus where their existence is completely illegal. From 9-14 November, Belarus Free Theatre will return home to the Young Vic, their first and only permanent home, offered up to them by Artistic Director David Lan shortly after they were granted political asylum in the UK in 2011. As associate artists at the theatre, they return with Time of Women, King Lear and Being Harold Pinter.

BFT have spent the past decade excavating taboos on the world stage alongside launching transnational campaigns in defence of freedom of speech and artistic expression. They have pioneered a unique model of performance-inspired campaigning tackling social and political taboos. Staging A Revolution will put ten taboos centre-stage to invigorate and inspire UK audiences to see themselves as positive change-makers. Following each performance, a curated panel of experts, including artists, campaigners, journalists and activists, will dig deeper into the documentary material that directly inspired each play, to generate fresh ideas around taking up action. It is an approach drawn directly from BFT’s work in Minsk where the space for free exchange of ideas and open debate is as valuable as the space in which to see independent theatre.

Staging A Revolution: I’m with the Banned
The flagship event of BFT’s tenth anniversary celebrations is the solidarity concert I’m with the Banned on Sunday 18 October at KoKo. BFT have brought together a unique line-up of banned bands from Belarus, Russia and Ukraine together with artists who live in political freedom to stand up for artistic freedom of expression and against injustice. Featuring a commissioned 10th anniversary logo by the renowned Chinese artist dissident Ai Weiwei, the line-up includes: David Gilmour, Pussy Riot, Brutto, Boombox, Diana Arbenia, Kim Cattrall, Neil Tennant and Juliet Stevenson – plus more special guests to be announced.

Belarus Free Theatre co-founder, Natalia Kaliada: “Staging A Revolution marks our 10th anniversary and gives us a unique opportunity not just to mount a Festival of performances and discussions in our adopted home of London, but to put musicians from Belarus, Russia and Ukraine centre-stage here. Over the last few years, freedoms in Belarus, Russia and Ukraine have been challenged by a corrupt power that has its roots in the Soviet Union. We cannot stay silent and allow this to continue to happen and potentially extend its grasp even further into Europe. The artists performing in our Concert, I’m with the Banned have all experienced the pressure of censorship in that geopolitical knot. We need musicians to be free to be outspoken; we need their voices to inspire us to continue to fight for equality, justice, freedom and democracy”.