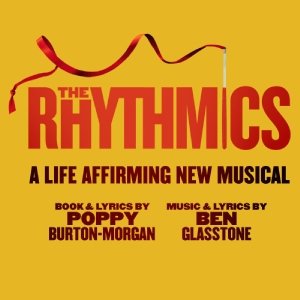 Metta Theatre and Aria Entertainment – two of the UK’s leading production companies devoted to British musical theatre – are pleased to announce that the album for brand-new life-affirming musical THE RHYTHMICS, is now available via Spotify, iTunes, Amazon Music, Apple Music and many other digital platforms. With book and lyrics by Metta’s Artistic Director Poppy Burton-Morgan, and music & lyrics from Stiles&Drewe award winner Ben Glasstone (Reanimator), THE RHYTHMICS explores the crisis of masculinity via a collection of oddballs belting their way through a thrillingly catchy guitar-led score.

Hapless single-dad Grey is in a rut. Teenage daughter Silva packs him off to revive his rockstar dreams, successfully auditioning for ‘Nick & the Rhythmics’ only to realise… he’s actually signed up for an All-male Rhythmic Gymnastics troupe. Against the odds these burly blokes make it as far as the World Championships – twirling their ‘ribbons of fire’ – and along the way Grey finally learns to commit to life. Calendar Girls meets Full Monty in this joyous new British musical.

The piece follows the ups and downs of single-father Grey and his precocious teenage daughter Silva – based somewhat autobiographically on Poppy Burton-Morgan’s own relationship with their father Louis Burton. Poppy and Ben invited Louis to play guest saxophone on the album which is being released following Louis’ 72nd birthday (7 August 2020).

Thanks to emergency support from Arts Council England, a hugely successful Crowdfunder campaign, which exceeded its original target, alongside Metta Theatre reserve funds, the producers were able to record the album (under socially distanced rules in studios across London, Brighton and Glasgow) during the month of July.

Full tracklisting is as follows:
Gymnastique Rhythmique
Mr Independent
Waiting to Begin
Rockstar
Why Why Why
Going Nowhere
I Was There
Got Your Back
Daddy You’re My Hero
Life’s Not a Competition
We Didn’t Come Here To Win

As well as the cast album (which features 11 of the 19 songs that will be in the show), the producers have released a full music video of the track ‘GOT YOUR BACK’ with fully integrated BSL choreography from Mark Smith (Artistic Director for Deaf Men Dancing), as well as captioning, in order to make it fully accessible to deaf and hard of hearing audiences.

As Poppy Burton-Morgan explains, “Got Your Back comes at the opening of Act 2. The Rhythmics team are having a drink together over Zoom (in the pub in the show proper) and finally starting to open up to each other emotionally. Leader of the troupe Nick reappears halfway through, having gone AWOL and he opens up through basic sign language (as he and his brother sometimes communicate in BSL as one of Jeremy’s children is deaf). Rifts are healed, and in the midst of the opening up they have a brainwave about how to transform their routine for the impending world championships…”

The Rhythmics – Got Your Back – Music Video

Established in 2005 by Poppy Burton-Morgan and Motley trained Designer William Reynolds, Metta Theatre has been at the forefront of new work – with a strong focus on the development of new British musical theatre. After their smash hit street-dance Jungle Book (Theatre Royal Windsor & UK tour), circus-musical Little Mermaid (Theatre By The Lake & UK tour) and In The Willows (Exeter Northcott & UK tour) the award-winning Metta Theatre bring you their first original British musical. Other productions include Mouthful (Trafalgar Studios) and Arab Nights (Soho Theatre & UK tour). They are known for combining emotionally powerful performances with imaginative theatricality and striking visual style. Metta Theatre is one of the UK’s leading mid-scale touring companies – making exceptional theatre and opera that represents and celebrates the diversity of our world.

Aria Entertainment was founded in 2012 by Katy Lipson. In 2017, Katy was awarded the Best Producer award by the Off-West End Awards and is a recipient of a Stage One Bursary and Start Up Award. She took part in the first ever UK/US Producer Exchange in 2019 and was nominated for International Producer Of The Year in 2020 by the League Of Professional Women in New York. She made “The Stage 100” a list of the most influential people working in British Theatre in 2018, 2019 and 2020 for her work as producing artistic director of the Hope Mill Theatre.

Poppy Burton-Morgan, who earlier this year won the Writers Guild of Great Britain Award for musical theatre book writing for In the Willows – The Hip Hop musical (which toured the UK in 2019), said “It has been a surreal and poignant experience recording this album and making a music video in isolation, especially for a show that is so intrinsically about community and togetherness. But I’m thrilled with what we’ve managed to create, and in a strange way I think the warmth and humanity of the performances shines through all the brighter in these dark times”