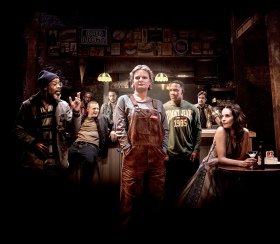 The Donmar Warehouse’s sold-out production of the Pulitzer Prize-winning Sweat by Lynn Nottage will transfer to London’s Gielgud Theatre for a limited 6 week run from Friday 7 June 2019.

Martha Plimpton will reprise her role as Tracey in Lynette Linton’s acclaimed production, with further casting to be announced.

Speaking about the transfer, Sweat Playwright Lynn Nottage said: “I’m beyond thrilled that this beautiful and haunting production of Sweat will have the opportunity to be in dialogue with a larger audience in the West End.”

Josie Rourke, Donmar Warehouse Artistic Director, said: “We are overjoyed to be able to bring Lynette Linton’s scorching production of Lynn Nottage’s great play to a bigger audience. We’re grateful for the people who have worked to make it happen.”

In 2011, Lynn Nottage began spending time with the people of Reading, Pennsylvania: officially one of
the poorest cities in the USA. During the following two years, she dug deep into the forgotten heart of middle America, finding a city divided by racial tension and the collapse of industry.

Sweat is the Pulitzer Prize-winning play that Lynn Nottage wrote following her experience.

Centered around the friendships of factory workers and set in an all-American bar, the play explores the relationships, resentments and fears of a community left divided by de-industrialisation. Simmering racial tensions and mounting anger lead to a devastating outcome for the residents of Reading, Pennsylvania.

Sweat is the first production of Artistic Director Josie Rourke’s final season at the Donmar, followed by Berberian Sound Studio in February and her revival of Sweet Charity in April. Sweat receives its West End transfer following its sold-out UK premiere at the Donmar Warehouse and is directed by Bush Theatre Artistic Director and former Donmar Resident Assistant Director Lynette Linton.

After creating the “absorbing and provocative” Version 2.0 and the “eminently lovable” Letters, Kashyap Raja returns to London with his new play Earth … END_OF_DOCUMENT_TOKEN_TO_BE_REPLACED