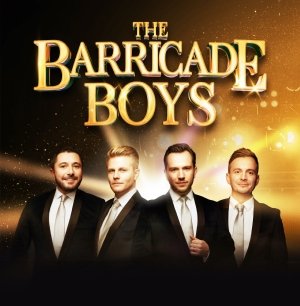 Celebrating their fifth anniversary ‘West End Supergroup’ The Barricade Boys have teamed up with the Sam Johnson Big Band to record this special rendition of Queen classic hit – Bohemian Rhapsody, which will be released on Youtube and Facebook today Thursday 16 March at 5pm.

The Barricade Boys started life at the Charing Cross Theatre in July 2015 and have gone on to become one of London’s most exciting international vocal groups. They have appeared in London’s West End and on Broadway plus numerous appearances all over the world. Earlier this year their viral lockdown rendition of ‘Bring Him Home’, featuring an array of west end leading men including international tenor Alfie Boe, was viewed by over 3 million people.

Simon Schofield, co-founder of The Barricade Boys says, “It’s been an incredible five year journey and we feel very lucky to have worked with some of the most talented performers and creatives London has to offer. When COVID-19 struck we, like so many others, had to cancel our tour but we’re delighted to be touring in 2021 with full details announced soon. A big thank you to all those who have supported us over the years, none of this would be possible without you.”


The Barricade Boys not only perform the world’s greatest show tunes, but they also celebrate music from some of the most iconic names in the music industry, from powerful ballads and beautiful operatic arias to some of the best pop, rock and swing numbers of all time.

Global Creatures, the producer of Moulin Rouge! The Musical, has announced today that the UK premiere of the acclaimed show will begin performances at … END_OF_DOCUMENT_TOKEN_TO_BE_REPLACED

Be More Chill, the mind-bendingly, delightfully fun, hit musical is set to open at The Shaftesbury Theatre for a limited 10 week run from Wednesday 30 … END_OF_DOCUMENT_TOKEN_TO_BE_REPLACED

Producer Stacey Mindich has announced that the London production of Dear Evan Hansen, which won the 2020 Olivier Award for Best Musical, will reopen … END_OF_DOCUMENT_TOKEN_TO_BE_REPLACED