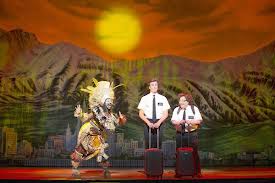 There are usually one or two shows which emerge as the big winners at any awards event, and the 2014 Laurence Olivier Awards were no exception. At this year’s ceremony, which was held at the Royal Opera House (ROH) in London’s Covent Garden, gongs were awarded to such productions as Merrily We Roll Along (Best Musical Revival), Jeeves and Wooster in Perfect Nonsense (Best New Comedy) and Les Miserables (Audience Award), as well as such talented individuals as Zrinka Cvitesic for Once (Best Actress in A Musical) and Mark Thompson for Charlie and The Chocolate Factory (Best Set Design). It was the Almeida Theatre who really drew attention though with an inspiring haul of eight awards for its West End transfers of plays Chimerica, which counted Best New Play among its five wins, and Ghosts, which took home four awards including Best Revival. Dominating the majority of the headlines though was the popular new musical The Book of Mormon.

The West End production of the smash-hit Broadway show scooped four awards at the Olivier Awards on Sunday, walking away with the coveted Best New Musical award and also triumphing through the work of Gavin Creel (Best Actor in A Musical) Stephen Ashfield (Best Performance in a Supporting Role in A Musical) and Casey Nicholaw (Best Theatre Choreographer).

It probably comes as no surprise to most people that The Book of Mormon was so successful at the Oliviers. It took Broadway by storm when it made its world premiere there in 2011 and was just as well-received when it transferred to London last year. The show is the brainchild of Matt Stone and Trey Parker, who of course created the adult animation TV series South Park. Robert Lopez, co-composer/lyricist of Avenue Q, collaborated with them on the musical’s score. The original Broadway production was an instant hit with audience and critics alike and won nine Tony Awards, with the cast recording also earning a Grammy Award for Best Musical Theater Album. Tickets are so in demand that a daily lottery system was put in place, a practice which was utilised in the UK as well when the show arrived here.

What is it about The Book of Mormon that has led to it becoming such a universal sensation then? There is no secret ingredient that guarantees a show will be successful, and success on the scale that The Book of Mormon has enjoyed is like a lightning strike, unpredictable and wild. One of the best things about BOM though is its originality. The satirical show bases its story around the Mormon religion, following two Mormon missionaries who have been sent to a remote village in Uganda to share the Book of Mormon with the locals, who are more concerned with war, famine, poverty and AIDs. Throw a brutal warlord into the mix as well and what you get is a show which is so very different from anything else around and which is perhaps the better for that.

Much has been made of the show’s ‘shock-value’, which mainly comes from the filthy song lyrics. Anyone who is familiar with Stone and Parker’s work on South Park would expect nothing less from these two though, as the comedy series has poked fun at…well, pretty much everything you can think of! They manage to get away with it all though because there is no malicious intent behind the satire, just tongue-in-cheek ribbing. They certainly push the boundaries sometimes, but the longevity of South Park proves that viewers can take the comedy in the same good-natured manner in which it was written. The Book of Mormon gets away with such songs as ‘Hasa Diga Eebowai’, which translates as ‘F**k You God’, because it follows the same suit. It also balances the comedy and gasp-out-loud moments with an emotional core and well thought out characters to create a unique and well-rounded show which offers the audience a truly memorable experience. Sometimes every aspect of a show will work together perfectly to make theatrical gold, and that’s what The Book of Mormon has managed to do. It’s more than just controversy and filthy-versed songs – if that’s all there was to it, then it wouldn’t have been such a hit.

The Book of Mormon was the most eagerly anticipated new musical to open in the West End last year and it was fully expected that it would dominate the musical category of the Olivier Awards. The show is fresh, funny and original, and while it’s not going to be everyone’s cup of tea, it has a wide appeal that has turned it into the darling of the theatre world. It more than deserved to do so well at this year’s Oliviers and long may it continue to have a presence in the West End.

Book Tickets for The Book of Mormon at the Prince of Wales Theatre.