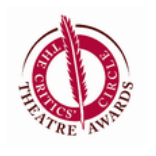 For the twelfth year the Awards are once again generously sponsored and presented in association with Nyman Libson Paul Chartered Accountants, leading entertainment industry specialists; and, for the eleventh year, supported by Delfont Mackintosh Theatres. This year, the Awards will also be supported by the Hilary and Stuart Williams Foundation for the Arts.

As ever, the ceremony will provide an informal gathering of award recipients, the drama critics, theatre practitioners and the media, convivially coming together to celebrate the critics’ personal choice of the best theatre, from throughout the UK, during the last calendar year.

Since the Awards’ inception in 1989 the theatre critics, consisting entirely of respected and influential working journalists, have prided themselves on offering something unique on the packed theatre awards circuit: each member of the Drama Section independently casts their vote based on personal choice, free of any discussion or industry influence, ensuring a highly democratic voting process.

Section Chairman Mark Shenton said: “The Critics’ Circle Theatre Awards continue to be the theatre industry’s most coveted of all the awards, since they register another vote of confidence in the best work by critics who have already made their opinions clear in their reviews, and so marks the best of the best. The ceremony, too, is much loved for its air of relaxed informality, and we are delighted to have new supporters the Hilary and Stuart Williams Foundation for the Arts joining the invaluable regular sponsorship of Nyman Lipson Paul Chartered Accountants, and our venue hosts at Delfont Mackintosh Theatres.”