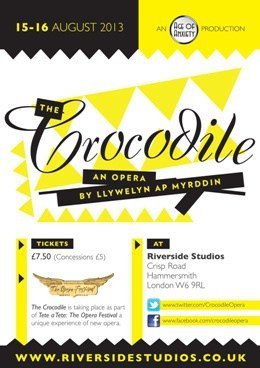 Age of Anxiety presents a comic and musically fascinating  opera based on a short story by Dostoyevksy as part of the 2013 Tète-a-Tète: The Opera Festival at Riverside Studios in August. Producer/director Alex Sutton and composer Llywelyn ap Myrddin collaborate on the production which stars a very large puppet crocodile.

The conductor is John Murton, set and costume design are by Benjamin Gerlis, and lighting design is by Christopher Nairne. The crocodile puppet is being designed and built by Roger and Julie Lade. Fleur Mellor is Producing in association with Age of Anxiety Productions.

The Crocodile tells the story of the showing of the great beast at a high society party at St. Petersburg University at the turn of the 19th/20th century. Surrounded by his acolytes, Dr. Philip Philipovich and his chums Semyon and Ivan are hard at work finalising the details of a pre-public press conference when disaster strikes and Ivan is devoured by the croc. What are Philip and Semyon to do?  And how to break the news to Ivan’s diva wife Elana!

Musically, the composer wanted to give The Crocodile the flavour of Russia but given the absurd nature of the work it became a collage with 19th century salon music rubbing up against 60’s jazz, tango, gospel and modernism.  The piece is a sharp and witty study of what happens when the logic of progress and culture starts to crumble around us, and we refuse to accept our fundamental desires.

Llywelyn ap Myrddin is a composer from West Wales who trained at the Guildhall. This is his first opera. In addition to writing concert music he previously ran death jazz group Deathray Trebuchay, and is currently producing hip-hop. Llywelyn is also a broadcaster, at the moment planning a radio documentary on Russian bell ringing.

Alex Sutton trained at the VGIK Institute of Cinematography (Moscow), with Irina Brown, Lab Ky Mo and at the Video College. Alex was Curator of the Grimeborn New Opera and Music Theatre Festival at the Arcola Theatre in 2009, which was nominated for the Peter Brook Empty Space Ensemble Award. He also ran an education programme based on David Almond’s The Savage alongside Grimeborn which saw young people compose and perform their own opera based on the book. Alex’s production of The House and Mirrors and Hearts won an MTM Fringe First Award in 2010 and in 2011 he was associate producer on the Olivier Award winning production of La Boheme.

2013 marks the seventh  Tète-a-Tète: The Opera Festival at Riverside Studio under the artistic direction of Bill Bankes-Jones. Thirty four companies will offer over 100 performances at very reasonable prices, all ticketed, between 1-18 August. www.tete-a-tete.org.uk/the-crocodile

Following on from the return of the critically-acclaimed, five-star production of Cyrano de Bergerac, The Jamie Lloyd Company brings Chekhov’s tale of … END_OF_DOCUMENT_TOKEN_TO_BE_REPLACED

THE PHANTOM OF THE OPERA at Her Majesty’s Theatre is delighted to announce that booking is extended to Saturday 4 March 2023, with a new performance … END_OF_DOCUMENT_TOKEN_TO_BE_REPLACED

Producer Runaway Entertainment is delighted to announce that the critically acclaimed, smash hit, supernatural thriller 2:22 - A Ghost Story will … END_OF_DOCUMENT_TOKEN_TO_BE_REPLACED