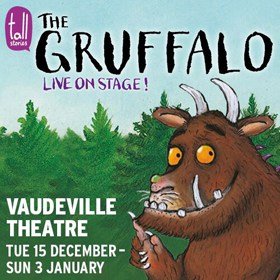 Children’s favourite The Gruffalo is making its return to London this December for a family fun-filled Christmas season in the West End.

Following its run on Broadway, the popular stage show is coming to the Vaudeville Theatre for a limited engagement this Christmas from 15th December 2015 to 3rd January 2016.

Join Mouse on a daring adventure through the deep dark wood in search of hazelnuts, meeting the cunning Fox, the eccentric old Owl and the party mad Snake on the way. Will the story of the fabled Gruffalo save Mouse from ending up as dinner for these wily woodland creatures? Armed with only a nut map and a little courage, Mouse must outwit them all. After all, there’s no such thing as a Gruffalo – is there?

Tall Stories’ The Gruffalo is a musical adaption based on the award-winning children’s book of the same name, by Julia Donaldson and Axel Scheffler. Since its first performance back in 2001, the production has entertained audiences in the UK, US, Ireland, Poland, Canada, Germany, Australia, Hong Kong, Dubai, Chile and on many more stages all around the world. It was most recently seen in London earlier this year, when it played a 10-week summer season at the Lyric Theatre, Shaftesbury Avenue from 1st July to 6th September 2015. It then headed to the New Victory Theater on Broadway for a short run between 17th and 24th October 2015.

The production is set to play at the Theatre Royal, Windsor and the Cambridge Arts Theatre throughout November, ahead of its West End run the following month.

The Gruffalo is presented by Tall Stories Theatre Company, a registered charity, founded in 1997 by joint artistic directors Olivia Jacobs and Toby Mitchell. Jacobs is the director of The Gruffalo and Mitchell is Creative Producer. Design is by Isla Shaw, with Lighting Design by James Whiteside and Composition/Sound Design by JollyGoodTunes Productions.

The West End cast stars Owen Guerin as The Gruffalo, Ellie Bell as Mouse and Timothy Richey as Predators.

The Gruffalo: Live on Stage! Opens at the Vaudeville Theatre on 15th December 2015, following Dawn French’s solo show Dawn French: 30 Million Minutes. It runs throughout the Christmas season and is set to close on 3rd January 2016.