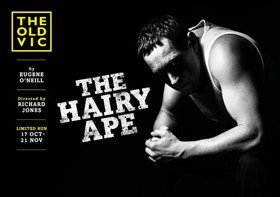 The Hairy Ape, starring Bertie Carvel, is the second production in Matthew Warchus’ opening season as Artistic Director of the Old Vic and sees the theatre transformed back to its original proscenium arch layout. A classic expressionist masterpiece by Nobel prize-winner Eugene O’Neill, The Hairy Ape tells the story of Yank, a labourer who revels in his status as the strongest stoker on a transatlantic ocean liner. But when Yank is called a ‘filthy beast’ by the overbred daughter of a steel merchant, he experiences an awakening of consciousness that leads him on a journey through the wealthy neighbourhoods and disenfranchised underbelly of New York society. Searching for a way to belong, Yank is forced to confront primal questions about his true place in the world.

Starring Olivier Award winner Bertie Carvel (Doctor Foster, Jonathan Strange & Mr Norrell and Matilda the Musical) and directed by legendary and multi-award-winning director Richard Jones (Hansel and Gretel, Too Clever By Half and Into The Woods).