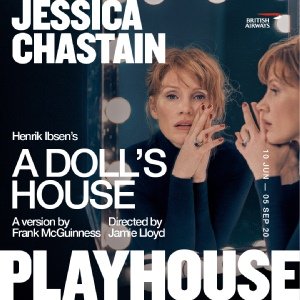 Jamie Lloyd said today, “At The Jamie Lloyd Company, our aim is to work with the most exceptional actors in the world, offering them new and unexpected challenges. Jessica Chastain is a gifted artist and is, of course, well known and respected for her extraordinary screen performances. However, I’m delighted she is now returning to the stage – where her career began – in this bold reappraisal of Ibsen’s great masterpiece.”

The season sees The Jamie Lloyd Company and Ambassador Theatre Group offering 15,000 free tickets and 15,000 £15 tickets for under 30s, key workers and those receiving job seeker’s allowance and other government benefits, supported by British Airways.

£15 tickets
These will be available for specific Monday evening and Thursday matinee performances across the season. The first four of these performances will be for Cyrano de Bergerac and go on sale on Monday 4 November at 12pm with further dates to be announced.

Free tickets
A dedicated outreach manager will be distributing these tickets amongst both secondary state schools and community organisations who otherwise would not have access to the theatre. If you work with a group who does not have the means or opportunity to visit the theatre, please register your interest here.

With design by Soutra Gilmour. Full cast and creative team to be announced.

Producer Runaway Entertainment is delighted to announce that the critically acclaimed, smash hit, supernatural thriller 2:22 - A Ghost Story will … END_OF_DOCUMENT_TOKEN_TO_BE_REPLACED

LES MISÉRABLES at the Sondheim Theatre is delighted to announce it has extended booking until Sunday 5 March 2023, and a new performance schedule from … END_OF_DOCUMENT_TOKEN_TO_BE_REPLACED