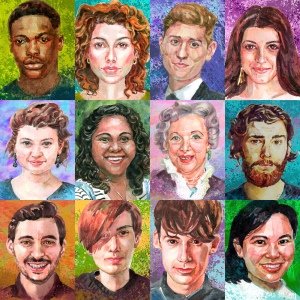 The King’s Head Theatre is proud to announce 12 new Artistic Associates, collectively encompassing a range of different theatrical specialisms. Their appointment reflects the venue’s commitment to showcasing the breadth of creative talent working on the London fringe.

Artistic Director Adam Spreadbury-Maher says: ‘I am thrilled to announce such a fantastic group of theatre-makers as our brand new Artistic Associates. From a first-time playwright to an actress whose career spans seven decades, their work embodies the breadth of our programme. I cannot wait to see where their talents take us next!‘

The new Associates include directors, playwrights, designers, stage managers and performers, with an age range of early twenties to early nineties and diverse racial, sexual and gender identities. They have between then worked at every echelon of London theatre, including the National Theatre, in the West End and Off West End. Amongst them are Harry Mackrill, Associate Director of the National Theatre’s acclaimed production of Angels in America, regular King’s Head Theatre collaborators Designer Amanda Mascarenhas, Lighting Designer Nic Farman and Sound Designer Nicola Chang, and former Trainee Resident Director Jamie Armitage, best known as Co-Director of the multi-Olivier Award nominated SIX The Musical.

The King’s Head Theatre was established in 1970. ‘Passionate about championing ethically produced fringe theatre, we are known for our challenging work and support of young artists. Last year 116,151 audience members saw a show of ours: 44,607 at our 110-seater home on Upper Street and 71,544 elsewhere. At our home in Islington we had 774 performances last year of 95 different shows. We are committed to fighting prejudice through the work we stage, the artists and staff we work with and by producing work for minority audience groups. We believe in fair pay for all on the fringe and create accessible routes for early-career artists to stage their work; work we are passionate about. Last year we announced the theatre is on the move.‘

The new Associates are:
Jamie Armitage – Theatre Director: Jamie is a Resident Director at the Almeida Theatre and a former Trainee Resident Director at the King’s Head Theatre. His most recent show was the multi-Olivier award-nominated Six the Musical, which is currently playing in the West End and is soon to open in Chicago. Jamie is returning to the King’s Head Theatre to direct Tennessee Williams’ Southern Belles in Summer 2019.

Nicola Chang – Sound Designer: Nicola is a Sound Designer and Composer for theatre, film and commercial media across the UK, US and Asia. She has been playing percussion and piano for close to 20 years, and currently plays for Six the Musical (West End). She has worked at the King’s Head Theatre on For Reasons That Remain Unclear and Beauty & the Beast: A Musical Parody.

Charles Entsie – Playwright: Charles Entsie is an Actor and Playwright. He began writing after continuously being faced with the difficulty of finding pieces that somewhat depicted the atmosphere he grew up in. He particularly enjoys raw and uncensored work – and most recently appeared as part Wo Lab’s Actor-Writer Showcase at the Bunker Theatre where he performed his piece Bossman. Charles is the winner of the 2019 Adrian Pagan Award, and his first play NSA will be produced at the King’s Head Theatre in 2020 for a full run.

Clancy Flynn – Lighting Designer: Clancy Flynn is a two-time Off-West End Theatre Award-nominated Lighting Designer. Their work has been toured both internationally and across the UK, with productions including Trainspotting Live (The Vaults London, UK and Australia Tours); R.E.B.E.L. (Barbican Theatre); Black is the Colour of My Voice (Trafalgar Studios) and How to Catch a Krampus (Pleasance Theatre).

Helena Jackson – Opera & Theatre Director: Helena Jackson is a Theatre and Opera Director. She is a winner of the University Women in the Arts scheme with mentoring by professionals such as Lucy Kerbal and Vicky Featherstone. She is Artistic Director of Sleepless Theatre Company (winner of the Bunker Breaking Out scheme in 2018), Director of the Off West End Award-nominated production of La Traviata (King’s Head Theatre) and Resident Director of a 100 strong repertory company in Krefeld/Moenchengladbach, Germany. In England, she has worked in venues such as the ENO, Scottish Opera, Bush Theatre, Royal Court, Lyric Hammersmith, HOME Manchester, Bristol Tobacco Factories, Assembly Festivals, New Diorama Theatre and King’s Head Theatre.

Harry Mackrill – Theatre Director: Harry Mackrill was Resident Director at the Tricycle from 2013 to 2015. For the National Theatre: Angels in America as Associate Director and The Motherf*cker with the Hat as Staff Director. In London’s West End: Handbagged as Associate Director and Red Velvet as Assistant Director. Other theatre includes: as Director, Boy with Beer (King’s Head Theatre); Things Will Never Be The Same Again (Tricycle Theatre); Coffee & Whisky (Ovalhouse); Look Back in Anger (New Wimbledon Studio), as Assistant Director, Multitudes, The House that will not Stand, The Colby Sisters, Red Velvet, Handbagged (all Tricycle Theatre); Mother Courage (Library Theatre, Manchester)

Octavia Penes – Stage Manager: Octavia Penes is a Romanian Stage Manager who graduated from National Music University in Bucharest, with a Bachelor degree in performing arts. She began her career in stage management during an eight-year contract with Bucharest National Opera House. In the UK, she has worked at venues including Holland Park Opera, Grange Park Opera Festival, Longborough Opera Festival and Dorset Opera festival. At the King’s Head Theatre, she has so far worked on King Tut, Buttons, The Mikado and Carmen.

Thelma Ruby – Actor: Thelma Ruby’s career spans 7 decades. She trained as an actor in New York, and was a performer with ENSA during World War II. She then moved into repertory theatre with Harry Hanson’s Court Players before beginning a glittering West End career, including performing in Fiddler in the Roof alongside Topol in 1984, co-starring in Cabaret with Judy Dench in 1968 and King Lear with Michael Hordern in 1970. She has performed her one-woman show at the King’s Head Theatre multiple times since 2016 and is currently starring in Jack Dee’s sitcom Bad Move on ITV.

Jess Tucker-Boyd – Movement Director: Jess is a Movement Director, Performer, published Poet and a Lecturer in Acting & Creative Practice at The University of Northampton. Jess trained originally as an Actor and Theatre maker at East 15 Acting School on the Acting & Contemporary Theatre course, she later went on to complete an MA in Movement Directing and Teaching at The Royal Central School of Speech and Drama. Selected credits include work at venues such as: King’s Head Theatre, Royal Court Theatre, National Theatre Studios, Trafalgar Studios, Yard Theatre and Arcola Theatre.

The producers and creative team are delighted to announce a new booking period for the West End production of the Tony, Grammy and Olivier … END_OF_DOCUMENT_TOKEN_TO_BE_REPLACED

Having had to shut down the production of Bruce Norris’ seminal play Clybourne Park at final dress rehearsal in March 2020, Trish Wadley Productions … END_OF_DOCUMENT_TOKEN_TO_BE_REPLACED

9 to 5 The Musical Celebrates DOLLY PARTON Being Awarded 47 New Gold and Platinum Certifications. As the UK Tour recommences Dolly Parton’s 9 to 5 … END_OF_DOCUMENT_TOKEN_TO_BE_REPLACED