Agatha Christie’s iconic thriller, The Mousetrap, the longest-running play in the world, marks its 70th anniversary today by announcing that the show will make its Broadway premiere next year. 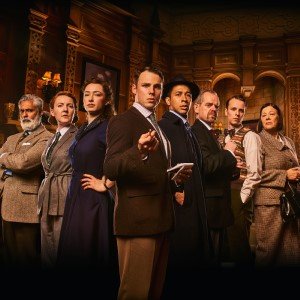 The legendary show – which has never been performed previously in New York – will open in 2023. For more information and to register for ticketing updates, go to www.mousetrapbroadway.com

Tickets will go on sale in the new year. Full booking and all production details will be announced in due course.

The New York premiere will be a co-production between The Mousetrap’s UK producer, Adam Spiegel, and multiple Tony Award-winning American producer Kevin McCollum, whose credits include Rent, Avenue Q, In The Heights and Motown The Musical, as well as the hugely successful Broadway productions of British smash hit shows The Play That Goes Wrong and Six.

Kevin said: “I am thrilled that Agatha Christie’s beloved murder mystery that changed popular theatre and has been a landmark attraction for US visitors to London’s West End for the past 70 years will now be coming to Broadway. I’m excited for the huge Christie fan-base in North America, and for the acting company in New York who will join the esteemed ranks of The Mousetrap alumni.”.

Adam said: “There can be no better way to mark today’s milestone in The Mousetrap’s illustrious run, than to look ahead to a production in New York. I feel after the longest out-of-town try-out in history, The Mousetrap is finally ready to transfer to Broadway!”

The Mousetrap today also releases a special cartoon, commemorating 70 years since the show first opened in London, and drawn by acclaimed writer and cartoonist for The Sunday Times and Private Eye, Nick Newman. See cartoon HERE.

The Mousetrap’s history continues to be written into London life – from husband-and-wife Richard Attenborough and Sheila Sim starring in the inaugural production in 1952, and Queen Elizabeth II attending the 50th-anniversary performance, through to the performance on 17 May 2021 marking the official reopening of the West End after the Covid lockdown.

Today, on the 70th Anniversary, a special midday matinee performance will take place in thanks and recognition of the vast number of people who have worked and continue to work on the production, with many guests having a historic connection to the show.

The Mousetrap is the genre-defining murder mystery from Agatha Christie, the world’s best-selling novelist of all time. The show has been performed over 28,915 times in London and has been seen by over 10 million people.

The 70th Anniversary touring production of The Mousetrap opened at Nottingham Theatre Royal in September 2022 and will perform at over 70 venues throughout the U.K. and Ireland, ensuring this extraordinary milestone year will be marked across the country.

The Mousetrap is produced by Adam Spiegel.

Following its multiple West End runs, and continuing success at its home – The Other Palace, Heathers the Musical will embark on its highly … END_OF_DOCUMENT_TOKEN_TO_BE_REPLACED

After creating the “absorbing and provocative” Version 2.0 and the “eminently lovable” Letters, Kashyap Raja returns to London with his new play Earth … END_OF_DOCUMENT_TOKEN_TO_BE_REPLACED