On Friday 25th November 2022, Agatha Christie’s iconic thriller, The Mousetrap, the longest-running play in the world, will celebrate its 70th anniversary in the West End. 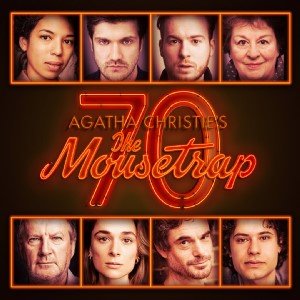 The Mousetrap’s history continues to be written into London life – from husband-and-wife Richard Attenborough and Sheila Sim starring in the inaugural production in 1952, and Queen Elizabeth II attending the 50th-anniversary performance, through to the performance on 17 May 2021 marking the official reopening of the West End after the Covid lockdown.

The Mousetrap is the genre-defining murder mystery from Agatha Christie, the world’s best-selling novelist of all time, whose canon of work is the 3rd most widely read in the English language behind only Shakespeare and the Bible. The show has been performed over 28,500 times in London and has been seen by over 10 million people.

In celebration of the 70th Anniversary, the producer of The Mousetrap, Adam Spiegel, has announced a special midday matinee performance on Friday 25th November. In thanks and recognition to the vast number of people who have worked and continue to work on the production, guests with a historic connection to the show will be invited to attend this special one-off performance.

In further celebration of this astonishing milestone anniversary, The Mousetrap have partnered with the National Literacy Trust. Over an initial two-year partnership, The Mousetrap will support the Trust, an independent charity working to give children the literacy skills to succeed in life, to deliver the Young Mystery Writers programme, inspiring a new generation of writers.

Working with over 30 secondary schools in London and cities across the UK, Young Mystery Writers not only supports young students from disadvantaged backgrounds to write their own whodunnit short story, but also gives them the full experience of a West End show. Participants will then have an opportunity to be published as part of a celebratory anthology.

Tim Judge, Head of Schools Programmes at the National Literacy Trust, said: “This partnership will use Agatha Christie’s incredible legacy to encourage a love of writing – a key literacy skill – in 600 students from disadvantaged backgrounds. Christie is the best-selling novelist of all time and Young Mystery Writers, on the 70th anniversary of The Mousetrap, will continue to serve as an inspiration to the next generation of mystery writers.”

Adam Spiegel, the producer of The Mousetrap, said: “As the custodian of The Mousetrap in its 70th year I am delighted to be supporting the fantastic work of the National Literacy Trust. Agatha Christie has inspired countless readers from every walk of life and I can think of no better partnership to honour the legacy of her work”

The new cast is also announced for the production at St. Martins Theatre. From Monday 21 November, the cast will be Sara Lessore (The Tempest and A Midsummer Night’s Dream at Shakespeare Globe) as Mollie Ralston, George Banks (Coronation Street on ITV) as Giles Ralston, Jonathan Tynan-Moss (Doctor Who Time Fracture for Immersive Everywhere) as Christopher Wren, Sarah Whitlock (returning from previous productions of The Mousetrap) as Mrs. Boyle, Philip Childs (Long Day’s Journey Into Night in London, New York and Los Angeles) as Major Metcalf, Phoebe Sparrow (Downton Abbey on ITV) as Miss Casewell, Rob Pomfret (recently in The Responder on BBC) as Mr. Paravicini and George Jones making his West End debut as Detective Sgt. Trotter.

The 70th Anniversary touring production of The Mousetrap opened at Nottingham Theatre Royal in September 2022 and will perform at over 70 venues throughout the U.K. and Ireland, ensuring this extraordinary milestone year will be marked across the country.

The Mousetrap is produced by Adam Spiegel and directed by Ian Talbot OBE.

Book Tickets for The Mousetrap

'Look anyone will tell you, I’m a pretty straight sort of guy.' Tony Blair A reckless reappraisal of the life of former Ugly Rumours front man and … END_OF_DOCUMENT_TOKEN_TO_BE_REPLACED

Michael Harrison and the Really Useful Group are thrilled to announce that The Wizard of Oz, the musical based on the iconic story by L. Frank Baum, … END_OF_DOCUMENT_TOKEN_TO_BE_REPLACED

Following major demand for tickets, the Queen of comedy Dawn French has announced a host of new UK tour dates for her critically acclaimed live … END_OF_DOCUMENT_TOKEN_TO_BE_REPLACED