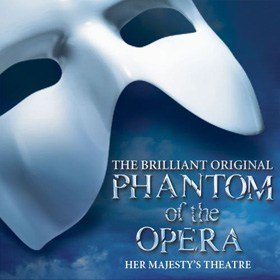 The West End is home to a great variety of musicals, many of which are only here for a short time. A run that lasts more than a year or so is an achievement in this day and age, and shows such as Mamma Mia, The Lion King, Wicked and Billy Elliot have defied the odds to become long-term residents of the West End. None of those come anywhere close to matching the staying power of The Phantom of the Opera, which is today celebrating its 29th birthday.

Andrew Lloyd Webber’s musical masterpiece opened at Her Majesty’s Theatre on 9th October 1986, exactly 29 years ago today. It’s an achievement rivalled only by Les Misérables, which this week celebrated 30 years in the West End, but whereas Les Misérables has moved venues several times since it first opened, Phantom is still playing in its original home at Her Majesty’s Theatre.

The Phantom of the Opera is a gothic romance of mystery and murder. Far beneath the majesty and splendour of the Paris Opera House, hides the Phantom in a shadowy existence. Shamed by his physical appearance and feared by all, the love he holds for his beautiful protégée Christine Daae is so strong that even her heart cannot resist.

The multi-award winning musical is based on the 1910 French novel, Le Fantome de l’Opera, by Gaston Leroux. It features a mesmerising score by Andrew Lloyd Webber, with lyrics by Charles Hart and additions from Richard Stilgoe; the latter also collaborated with Llloyd Webber on the show’s book. Add to that Gillian Lynne’s inspired choreography and staging and Maria Bjornson’s beautiful designs, not to mention the jaw-dropping special effects in the production, and Phantom is a show as close to musical theatre perfection as possible.

It made its world debut at Her Majesty’s Theatre in 1986 with Michael Crawford and Sarah Brightman in the lead roles of The Phantom and Christine, joined in the principal line-up by Steve Barton as Raoul, Rosemary Ashe as Carlotta, Mary Millar as Madame Giry, Janet Davenish as Meg Giry, John Savident as Monsieur Firmin, David Firth as Monsieur Andre and John Aron as Piangi. Crawford, Brightman and Barton all reprised their roles in the Broadway production, which opened at the Majestic Theatre on 26th January 1988 and continues to play there to this day.

There have been dozens of productions worldwide since then, with Phantom currently playing in Hamburg, Stockholm, Moscow, China and Budapest, and also touring North America. It also inspired a film adaption in 2005, starring Gerard Butler and Emmy Rossum, and an edited production opened at The Venetian Resort Hotel Casino in Las Vegas, Nevada in 2006. Re-titled Phantom – The Las Vegas Spectacular, it was directed and choreographed by Harold Prince and Gillian Lynne and ran until September 2012.

The show also birthed a sequel in 2010. Love Never Dies was a follow-up musical to The Phantom of the Opera, set 10 years after the events of the original, which saw Christine Daae reunited with the Phantom after she is invited to perform at the mysterious Phantasma in Coney Island, New York. Starring Ramin Karimloo as the Phantom opposite Sierra Boggess as Christine, Love Never Dies opened at the Adelphi Theatre on 9th March 2010 and ran for almost 18 months, closing on 27th August 2011. It received mixed reviews, but the re-worked Melbourne production which followed was generally better received and the show has since gone on to play in countries all around the world.

The Phantom of the Opera is one of the most successful musicals of all time, having been seen by more than 140 million people and with a worldwide gross of over $6 billion. It has won more than 70 theatre awards, including three Olivier Awards and seven Tony Awards and been produced in 151 cities, in 30 countries around the world. Phantom is Broadway’s longest-running show ever, and after more than 11,000 performances, is also the second longest-running show in the West End, behind Les Misérables.

The show celebrated its 25th anniversary in 2011 with three performances of a fully-staged production at the Royal Albert Hall. Ramin Karimloo and Sierra Boggess led the production as the Phantom and Christine, alongside Hadley Fraser as Raoul, Wendy Ferguson as Carlotta, Liz Robertson as Madame Giry, Daisy Maywood as Meg Giry, Barry James as Monsieur Firmin, Gareth Snook as Monsieur Andre and Wynne Evans as Piangi and an ensemble of former Phantom cast members. Michael Crawford and Sarah Brightman made an appearance at the end of the performance, with Brightman performing the title song with iconic Phantom’s from around the world, John Owen-Jones, Colm Wilkinson, Peter Joback, Anthony Warlow and Ramin Karimloo, who then performed ‘Music of the Night’ together.

The London production had a major cast-change on 7th September 2015 and currently stars John Owen-Jones as the Phantom and Celinde Schoenmaker as Christine. Also in the principal line-up are Nadim Naaman as Raoul, Megan Llewellyn as Carlotta, Jacinta Mulcahy as Madame Giry, Alicia Beck as Meg Giry, Michael Matus as Monsieur Firmin, Christopher Dickens as Monsieur Andre and John Ellis as Piangi.

The Phantom of the Opera is an iconic piece of musical theatre and a favourite of many theatre fans – myself included. It’s a timeless show that audiences return to again and again, and after 29 years, remains one of the most popular draws in the West End with no sign of that changing any time soon. So happy birthday Phantom! Next year it celebrates an amazing 30 years in the West End, with many more to follow after that.