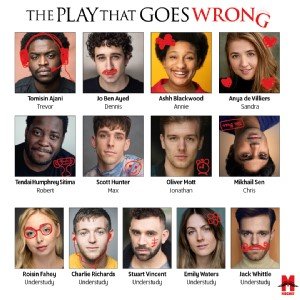 Awarded the 2014 WhatsOnStage Award for Best New Comedy, the 2015 Olivier Award for Best New Comedy and a Tony Award for the Broadway transfer, The Play That Goes Wrong continues to delight audiences in the West End and around the world. The show’s success is a testament to the hard work and determination of a group of drama school graduates who became friends, set up a company under the name ‘Mischief’ and created an extraordinary body of work. The Play That Goes Wrong shows no signs of slowing down since its first performance atThe Old Red Lion nearly 10 years ago with only four paying customers. Since then, it has played to an audience of over two million and now has productions in over 30 countries.

The Play That Goes Wrong is co-written by Mischief company members Henry Lewis, Jonathan Sayer and Henry Shields and is directed by Mark Bell, with set designs by Nigel Hook, costumes by Roberto Surace, lighting by Ric Mountjoy, original music by Rob Falconer, sound design by Andy Johnson, the associate director is Sean Turner and the resident director is Amy Marchant. The Play That Goes Wrong is produced in the West End by Kenny Wax Ltd and Stage Presence Ltd.

Mischief Theatre Ltd. was founded in 2008 by a group of acting graduates of LAMDA and began as an improvised comedy group. Mischief performs across the UK and internationally with original scripted and improvised work and also has a programme of workshops. The Play That Goes Wrong is currently playing in the West End and begins a three-month tour at Bath Theatre Royal in April, with both Magic Goes Wrong and Groan Ups currently touring the UK. Series 2 of the BBC comedy The Goes Wrong Show is currently available to watch on iPlayer. The company is owned and controlled by its original members and is led by a creative group and its directors Henry Lewis and Jonathan Sayer.

AGE
8+
Please note children under 15 years of age must be accompanied by an adult over 18 years of age.

The multi-award-winning musical Come From Away, which celebrated its 1000th performance in the West End last night, Monday 28th November, announces … END_OF_DOCUMENT_TOKEN_TO_BE_REPLACED

The UK and Ireland Tour of Disney’s The Lion King will welcome 12 new members to its cast of over 50 actors, singers and dancers this winter. The … END_OF_DOCUMENT_TOKEN_TO_BE_REPLACED

The full cast has been announced for ONCE – IN CONCERT at the London Palladium on Sunday 12 March (at 3pm and 7pm). ONCE - IN CONCERT, which went on … END_OF_DOCUMENT_TOKEN_TO_BE_REPLACED

Agatha Christie’s iconic thriller, The Mousetrap, the longest-running play in the world, marks its 70th anniversary today by announcing that the show … END_OF_DOCUMENT_TOKEN_TO_BE_REPLACED