THE PLAY THAT GOES WRONG IS BACK ON TOUR!
CRASHING INTO THEATRES NATIONWIDE FROM 20 APRIL 2022

The Play That Goes Wrong, the Olivier Award-winning box office hit that continues to entertain audiences on a global scale, will return to its touring roots and embark on its fifth UK tour this spring. The production will open at Theatre Royal Bath on 20 April before visiting Mold, Southend, Leicester, Birmingham, Liverpool, Manchester, Newcastle, Plymouth, Bristol, Sheffield, Hull, Milton Keynes and Dartford, with further dates to be announced. 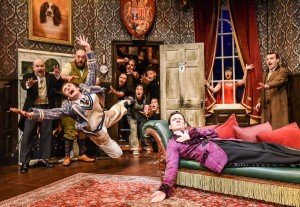 Awarded the 2014 WhatsOnStage Award for Best New Comedy, the 2015 Olivier Award for Best New Comedy and a Tony Award for the Broadway transfer, The Play That Goes Wrong is now booking into its ninth year in the West End and continues to delight audiences around the world. The show’s success is a testament to the hard work and determination of a group of drama school graduates who became friends, set up a company under the name ‘Mischief’ and created an extraordinary body of work. The Play That Goes Wrong shows no signs of slowing down since its first performance at a London fringe venue with only four paying customers. Since then, it has played to an audience of over two million and now has productions in over 30 countries.

The play features the (fictional) Cornley Drama Society who are putting on a 1920s murder mystery, but as the title suggests, everything that can go wrong… does! As the accident prone thesps battle against all the odds to reach their final curtain call, hilarious results ensue!

Mischief’s other West End successes include Magic Goes Wrong, Groan Ups, Peter Pan Goes Wrong, Mischief Movie Night and A Comedy About A Bank Robbery. Magic Goes Wrong and Groan Ups are also currently touring the UK. The second series of their award-winning television comedy, The Goes Wrong Show, launched on BBC One in September 2021. The five-part series was broadcast weekly and is currently available on BBC iPlayer. The company is owned and controlled by its original members and is led by a creative group and its directors Henry Lewis and Jonathan Sayer.

The Play That Goes Wrong is co-written by Mischief company members Henry Lewis, Jonathan Sayer and Henry Shields. The tour is directed by Sean Turner, originally directed by Mark Bell, with set designs by Nigel Hook, costumes by Roberto Surace, lighting by Ric Mountjoy and sound design by Andy Johnson. Casting for the 2022 UK tour is yet to be announced. The Play That Goes Wrong is produced by Kenny Wax Ltd and Stage Presence Ltd.

Further dates to be announced…

After creating the “absorbing and provocative” Version 2.0 and the “eminently lovable” Letters, Kashyap Raja returns to London with his new play Earth … END_OF_DOCUMENT_TOKEN_TO_BE_REPLACED