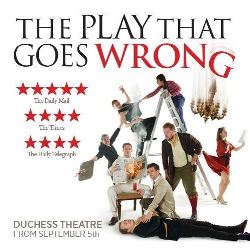 The Play That Goes Wrong, the Olivier Award-winning box office hit, astoundingly celebrates its fourth birthday today by announcing a new booking period with tickets going on sale until 27 October 2019.

Awarded the 2014 Whatsonstage.com Best New Comedy, the 2015 Olivier Award for Best New Comedy and a Tony award for the Broadway transfer, The Play That Goes Wrong continues to miraculously delight audiences in the West End. The remarkable rags-to-riches story shows no signs of slowing down for a play which started its life at a London fringe venue with only four paying customers at the first performance. Since then, it has played to an audience of over two million. This Autumn The Play That Goes Wrong will be playing simultaneously in twelve countries and will also open in Moscow on 6 October.

The company is completed by Natasha Culley, Matthew Howell, Helana Muir and James Watterson. Mischief Theatre was founded in 2008 by a group of graduates of The London Academy of Music and Dramatic Art (LAMDA) and began as an improvised comedy group. Mischief Theatre performs across the UK and internationally with improvised and original scripted work. Their other production The Comedy About A Bank Robbery is currently at the Criterion Theatre and on a national UK tour whilst The Play That Goes Wrong is also on a national UK tour and is currently the longest-running play on Broadway. The company is led by Artistic Director Henry Lewis and Company Director Jonathan Sayer.


The Play That Goes Wrong is co-written by Mischief Theatre company members Henry Lewis, Jonathan Sayer and Henry Shields and is directed by Mark Bell, with set designs by Nigel Hook, lighting by Ric Mountjoy, sound design by Andy Johnson and costumes by Roberto Surace. The Play That Goes Wrong is produced in the West End by Kenny Wax Ltd and Stage Presence Ltd. The Associate Director is Sean Turner and Resident Director is Hannah Sharkey.

The Play That Goes Wrong is currently enjoying its third UK tour, performing at 37 venues nationwide, until 6 October 2018.

Book The Play That Goes Wrong Tickets for the Duchess Theatre, London.

Following its multiple West End runs, and continuing success at its home – The Other Palace, Heathers the Musical will embark on its highly … END_OF_DOCUMENT_TOKEN_TO_BE_REPLACED

After creating the “absorbing and provocative” Version 2.0 and the “eminently lovable” Letters, Kashyap Raja returns to London with his new play Earth … END_OF_DOCUMENT_TOKEN_TO_BE_REPLACED