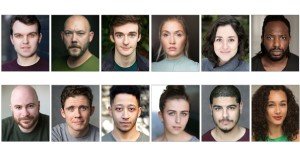 Winning multiple awards including the 2015 Olivier Award for Best New Comedy and a Tony Award for the Broadway transfer, The Play That Goes Wrong is now in its seventh year in the West End and has become a global phenomenon with productions in over 35 countries and across 6 continents. The show’s success is a testament to the hard work and determination of a group of drama school graduates who became friends, set up a company under the name ‘Mischief’ and created an extraordinary body of work. The Play That Goes Wrong shows no signs of slowing down since its first performance at a London fringe venue with only four paying customers. Since then, it has played to an audience of over two million worldwide.

The play features the (fictional) Cornley Drama Society who are putting on a 1920s murder mystery, ‘The Murder at Haversham Manor’, but as the title suggests, everything that can go wrong … does! As the accident-prone thesps battle against all the odds to reach their final curtain call, hilarious results ensue!

Mischief’s other West End successes include Peter Pan Goes Wrong, A Comedy About A Bank Robbery, Groan Ups, Mischief Movie Night and Magic Goes Wrong. Their hugely successful six-part TV Series, The Goes Wrong Show, aired in the UK on BBC ONE and on Amazon Prime Video in the US, Canada and Australia. The show received a 2020 TV Choice Award nomination for Best Comedy and a second series commission for a 2020 Christmas special, The Nativity. Series two is currently in production.

The global smash hit musical MAMMA MIA! will return to London’s West End at the Novello Theatre on 25 August 2021. Now in its 23rd year in London, … END_OF_DOCUMENT_TOKEN_TO_BE_REPLACED

Greetings, salutations and welcome to the West End 2021 class of Westerberg High. Leading the cast in the highly celebrated return of Heathers the … END_OF_DOCUMENT_TOKEN_TO_BE_REPLACED

THE PRINCE OF EGYPT, the hit musical based on the classic DreamWorks Animation film, is proud to confirm the complete cast, orchestra and company of … END_OF_DOCUMENT_TOKEN_TO_BE_REPLACED