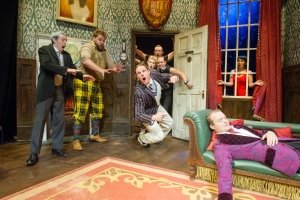 Awarded the 2014 WhatsOnStage Award for Best New Comedy, the 2015 Olivier Award for Best New Comedy and a Tony Award for the Broadway transfer, The Play That Goes Wrong continues to delight audiences in the West End. The show’s success is a testament to the hard work and determination of a group of drama school graduates who became friends, set up a company under the name ‘Mischief’ and created an extraordinary body of work. The Play That Goes Wrong shows no signs of slowing down since its first performance at a London fringe venue with only four paying customers.

Since then, it has played to an audience of over two million and now has productions in over 30 countries.

The Play That Goes Wrong Tickets for the Duchess Theatre, London.