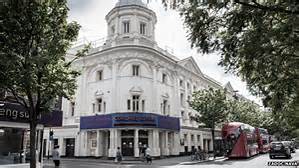 The Print Room has announced its Spring 2016 season at the Coronet, which runs from 18th January to 7th May 2016.

When a handsome young German arrives in 1950’s Britain from a traumatised Europe and takes up the position of tutor for the Harrington family, it appears that he has found comfort in the bosom of their home. But his arrival is the catalyst that reveals the deep, impacted layers of this family’s dysfunction.

The production is directed by Jamie Glover, whose previous work for The Print Room includes the successful 2013 production of Harold Pinter’s The Dumb Waiter. It also has set design by Andrew D Edwards, lighting by Johanna Town and sound by Peter Rice.

The venue then hosts the world premiere of a dance show as Print Room Associate Artist, Hubert Essakow, returns to present the third in his trilogy of dance pieces celebrating the elements. Terra is inspired by ‘earth’ and features a cast of six dancers in ‘a journey through the shifting horizons and changing seasons of an unpredictable earth.’

The conclusion to the three years of Essakow’s work, Terra has an original score by French film composer Jean-Michel Bernard, with new poetry by Ben Okri. Set design is by Sofie Lachaert and Luc D’Hanis, with lighting by David Plater and sound by Gareth Mitchell. The dance cast includes Rob Bridger, Monique Jonas, Estella Merlos and Benjamin Warbis.

The Print Room complete their Spring 2016 Season with a presentation of the first major revival in over 30 years of Jean Genet’s Deathwatch, in a translation by David Rudkin which was originally commissioned by the RSC in 1987.

Three young convicts share a cell. Locked into a world of dangerous rivalries petty criminals Lefranc and Maurice compete for the attention of the charismatic condemned man, Green-Eyes

Deathwatch was Genet’s first play, and draws from his own experience in French prisons. The production will be directed by Geraldine Alexander and is her second for The Print Room, following the 2013 production of Amygdala. It is set to run at the venue from 11th April to 7th May 2016, with an official opening night on 14th April 2016.

Founded in 2010, The Print Room was previously located in a former print warehouse off Westbourne Grove and has now found a permanent home at the Notting Hill Victorian playhouse, The Coronet, which is undergoing a five-year restoration plan.