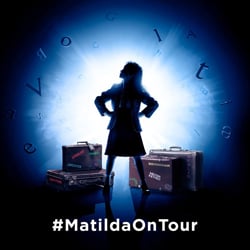 The Royal Shakespeare Company has announced new child casting for the Matilda The Musical UK and Ireland Tour with Sophia Ally and Scarlett Cecil joining Annalise Bradbury and Nicola Turner in sharing the title role of Matilda from 29 August. The West End production will continue to play at the Cambridge Theatre, where it is now in its seventh year and is booking until 20 October 2019.

The previously announced adult cast includes Craige Els who, having played Miss Trunchbull in the West End for three years from 2014 to 2017, reprised the role when the tour began in March and will remain in the company until 12 January. Carly Thoms (Miss Honey), and Sebastien Torkia and Rebecca Thornhill (Mr and Mrs Wormwood) will continue in their roles until the tour concludes its run at Norwich Theatre Royal on 17 August 2019.

Matilda The Musical has now been seen by 8 million people worldwide, having toured to over 65 cities and played more than 6000 performances in the West End, on Broadway and on tour across North America, the UK, Ireland, Australia and New Zealand. Matilda The Musical will have its first non-English language production at the LG Arts Centre in Seoul, South Korea from September 2018.

The North America production toured 52 cities. The Australian and New Zealand production won a Sydney Theatre Award for Best Musical in 2015, and played sold-out seasons in Melbourne, Brisbane, Perth, Adelaide and Auckland. The show broke further records in July 2016 by winning all 13 Helpmann Awards for which it was nominated.

The production is designed by Rob Howell, with choreography by Peter Darling, orchestrations, additional music and musical supervision by Christopher Nightingale, lighting by Hugh Vanstone, sound by Simon Baker and the special effects and illusions are by Paul Kieve.

Book Tickets for Matilda the Musical at the Cambridge Theatre, London.

Sonia Friedman Productions has announced that Ruth Wilson will star in Ivo van Hove’s adaptation of Jean Cocteau’s The Human Voice, which he also … END_OF_DOCUMENT_TOKEN_TO_BE_REPLACED

The award-winning smash-hit production of Girl From The North Country, written and directed by celebrated playwright Conor McPherson (The Weir, The … END_OF_DOCUMENT_TOKEN_TO_BE_REPLACED

John Barrowman is back on tour with his new show ‘I am What I am’ The tour launches on Saturday 30 April, 2022 at Southend‘s Cliff’s Pavilion and … END_OF_DOCUMENT_TOKEN_TO_BE_REPLACED

Producer Karl Sydow has announced the West End return of a dazzlingly renewed version of Dirty Dancing - The Classic Story On Stage, following a … END_OF_DOCUMENT_TOKEN_TO_BE_REPLACED