Home » London Theatre News » The Smeds and The Smoos to premiere at the Rose Theatre, Kingston

Award-winning theatre company TALL STORIES has announced a major UK tour of the first-ever live stage production of Julia Donaldson and Axel Scheffler’s brilliant picture book THE SMEDS AND THE SMOOS this autumn. 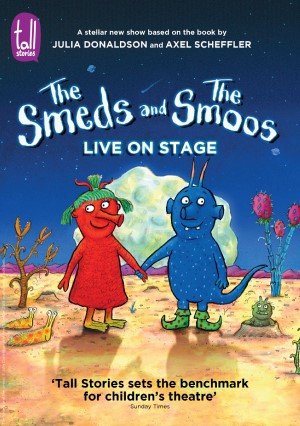 Recently awarded the prestigious British Book Award – Children’s Book of the Year (Illustrated and Non-fiction), this joyous story of two star-crossed aliens on a far-off planet is being developed and previewed at Tall Stories’ new studio space at Central Library, Islington before receiving its world premiere at the ROSE THEATRE in Kingston-upon-Thames, from 27 to 31 October 2021.

The autumn tour will continue regionally, with a Christmas run at Leicester Curve (30 Nov – 9 Jan 2022). The tour continues from January 2022, with all touring dates to be announced soon.

Julia Donaldson said: “It’s a whole twenty years since Tall Stories brought ‘The Gruffalo’ to the stage, and it’s been brilliant that since then they’ve also successfully adapted ‘The Gruffalo’s Child’, ‘Room on the Broom’ and ‘The Snail and the Whale’. So I’m thrilled that the company is now developing ‘The Smeds and the Smoos’, with its cast of aliens and its Romeo-and-Juliet-type plot (except that my story has a happy ending). I can’t wait to see the show, and I bet everyone’s going to love it!”

Axel Scheffler said: “I’m excited that Tall Stories will be bringing ‘The Smeds and the Smoos’ to the stage this year. Bill and Janet’s alien adventure feels very timely, as it’s a tale about unity and we have all felt isolated over the last year. Tall Stories have the challenge of creating lots of different alien species on stage – and I can’t wait to see how they bring the book to life.’

Alongside many other shows, Tall Stories has previously adapted four bestselling Donaldson/Scheffler books to great acclaim: THE GRUFFALO, ROOM ON THE BROOM, THE GRUFFALO’S CHILD and THE SNAIL AND THE WHALE.

THE SMEDS AND THE SMOOS was published by Alison Green Books (an imprint of Scholastic) in September 2019 and was the bestselling new picture book of that year. It was the number one bestselling picture book of 2020 in paperback too. It has been translated into 23 languages. Praise includes: ‘a book for our time’ (BBC Radio 2), ‘the most exciting book yet from the creator of The Gruffalo’ (The Sun), ‘a timely tale of tolerance that’s fun to read aloud’ (Daily Express) and ‘the perfect, inspirational story for a troubled world’ (Lancashire Evening Post).

The book tells the story of two rival groups of aliens living on a far-off planet: the Smeds (who are red) and the Smoos (who are blue). The two groups mistrust each other and the children are told to never play together. So when a young Smed and Smoo fall in love and zoom off into space together, how will their families get them back?

At a time when so many young people feel isolated and cut off from each other, Tall Stories is proud to be working on a production that focuses on unity and understanding.

Created in Tall Stories’ signature physical storytelling style with original music and songs, THE SMEDS AND THE SMOOS will be directed by Tall Stories’ artistic director Toby Mitchell, with movement direction by Morag Cross, set and costume design by Barney George, lighting design by Peter Harrison, and music and lyrics by Jon Fiber and Andy Shaw.

Tall Stories is currently touring THE SNAIL AND THE WHALE to venues across the country until August and will also be performing THE GRUFFALO at Alexandra Palace, London, from 30 July to 29 August.

Tall Stories to produce Julia Donaldson and Axel Scheffler’s
THE SMEDS AND THE SMOOS to premiere at the Rose Theatre, Kingston, in October 2021

Sir David Suchet makes his eagerly awaited return to UK stages in POIROT AND MORE, A RETROSPECTIVE this autumn (2021). Following a successful tour of … END_OF_DOCUMENT_TOKEN_TO_BE_REPLACED

Selladoor Worldwide is delighted to cheer on the full cast of BRING IT ON THE MUSICAL, who will be joining musical theatre and TV star Amber Davies as … END_OF_DOCUMENT_TOKEN_TO_BE_REPLACED