Back by popular demand, the Olivier Award-nominated stage production of The Tiger Who Came to Tea today announces its return to Theatre Royal Haymarket for another West End summer season following last year’s sellout success. A musical play adapted and directed by David Wood OBE, based on the classic tale by the late Judith Kerr OBE, The Tiger Who Came to Tea will open at Theatre Royal Haymarket on Monday 11 July playing until Sunday 4 September 2022. Casting for the London production is yet to be announced. 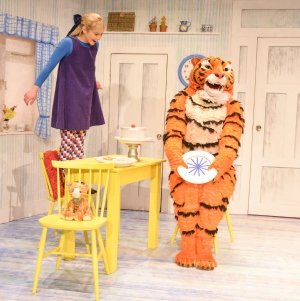 The Tiger Who Came to Tea is also currently enjoying a nationwide tour, booking until 1 September 2022.

Hailed as Britain’s best-loved picture book, Judith Kerr’s timeless classic The Tiger Who Came to Tea is now in its 54th year, selling over 5 million copies since it was first published in 1968. The stage show premiered in 2008 and has since toured nationally and internationally, including Christmas seasons at the Sydney Opera House and Melbourne Arts Centre with sold out dates in Beijing, Shanghai, Hong Kong, Singapore, Dubai and Bahrain. In 2012 the production was nominated for the Olivier Award for ‘Best Family Entertainment’. This year marks its 8th West End season.

Bringing the nation’s favourite tea-guzzling tiger to life on stage, this musical slice of teatime mayhem entertains with sing-a-long songs, oodles of magic and interactive fun. It’s the ideal introduction to live theatre for children aged three and above and the perfect summer treat for the whole family.

The doorbell rings just as Sophie and her Mummy are sitting down to tea. Who could it possibly be? What they certainly don’t expect to see at the door is a big furry, stripy tiger!

Andrew Lloyd Webber’s The Phantom of the Opera has returned to its home, Her Majesty’s Theatre London. Experience the thrill of the West End’s most … END_OF_DOCUMENT_TOKEN_TO_BE_REPLACED

The full cast is announced today for the 40th Anniversary tour of Michael Frayn’s multi-award-winning farce, Noises Off, which will open at Theatre … END_OF_DOCUMENT_TOKEN_TO_BE_REPLACED

Adapted from Susan Hill’s classic book, The Woman in Black at the Fortune Theatre has been thrilling London audiences since 1989. In The Woman … END_OF_DOCUMENT_TOKEN_TO_BE_REPLACED

The producers of the multi-award-winning, critically acclaimed production of CABARET at the KIT KAT CLUB in London’s West End are thrilled to announce … END_OF_DOCUMENT_TOKEN_TO_BE_REPLACED