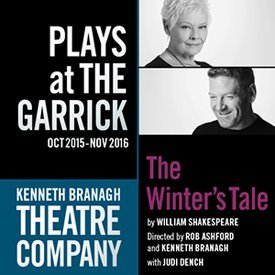 The Kenneth Branagh Theatre Company’s sold out West End production of The Winter’s Tale topped the UK cinema box office last night as it was broadcast to 520 cinemas across the country in partnership with Picturehouse Entertainment. Broadcast live from the Garrick Theatre in London’s West End to cinemas around the world, the critically acclaimed production took in excess of £1.1m at the box office in the UK alone, beating The Hunger Games: Mockingjay, Part 2 to claim the top spot. The full international box office takings will be calculated soon.

Internationally, The Winter’s Tale was broadcast to more than 1,300 cinemas, selling out screenings in countries including Portugal, Spain, Canada, Austria, Malta and Germany.

The Winter’s Tale, Shakespeare’s timeless tragicomedy of obsession and redemption, which opened to critical acclaim at London’s Garrick Theatre on 7th November, 2015 is reimagined in a new production co-directed by Rob Ashford and Kenneth Branagh. Judi Dench plays Paulina opposite Kenneth Branagh as Leontes.

The cinema broadcast of The Winter’s Tale was directed by Benjamin Caron, who has also recently collaborated with Kenneth Branagh on the forthcoming series of Wallander, due to be broadcast on the BBC in 2016.

The Winter’s Tale will also be screened in US cinemas on 30th November, 2015. Encore broadcasts will be held across the UK throughout the Christmas period.

Kenneth Branagh said: “To be able to celebrate our production of The Winter’s Tale with cinema audiences is a true privilege. I would like to thank our partners at Picturehouse and the talented Benjamin Caron for enabling us to bring The Winter’s Tale to screens around the world.”

The broadcast date for Romeo and Juliet, which plays at the Garrick from 12th May to 13th August, is 7th July 2016 and tickets are now on sale. The Entertainer will also be screened later in 2016.

The Winter’s Tale, Harlequinade / All On Her Own, Red Velvet, The Painkiller, Romeo and Juliet and The Entertainer make up the inaugural Plays at the Garrick season for the Kenneth Branagh Theatre Company. For more information and to buy theatre tickets for these productions please see www.branaghtheatre.com