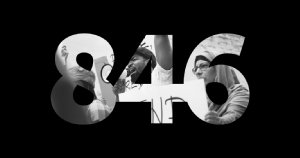 On May 25th 2020, a police officer in Minneapolis killed George Floyd by kneeling on his neck for eight minutes and 46 seconds.

This brutal murder ignited a global surge of anger and pain. An ocean away, from the Windrush scandal to the Grenfell Tower tragedy, racist oppression is very much alive in the UK.

Acclaimed playwright Roy Williams brought together 14 writers to respond artistically to George Floyd’s murder and the Black Lives Matter Movement. From this came 846 – a collection of short pieces. Each is a standalone exploration of racial inequality and oppression, but together they form a powerful tapestry of voices.

846 is directed by Ola Ince and features a soundscape by Donato Wharton.

The audio play will be released to listen to for free at www.stratfordeast.com/846 on Monday 20 July. 846 will be adapted and performed live as part of the Greenwich+Docklands International Festival on Saturday 12 September. Casting for 846 Live will be announced in due course and tickets will be available from www.festival.org/gdif-846 from Thursday 06 August.

Lead Playwright, Roy Williams, said: “Like the rest of the world, I was of course sickened at the sight of that video. The blatant murder of a fellow black man. There is no other way to describe it. As shocking as it was, the little voice inside my head was saying ‘You know you are going to write about this, so what are you waiting for? Get going!’ I did, but I knew I couldn’t do this alone. I reached out to a group of Black and Asian writers that I belong to on Facebook. They were as shocked and as sickened as I was. I told them what my little voice was telling me, that we should respond!”

Stratford East Artistic Director, Nadia Fall, said: “In normal times, we’d be front and centre with an artistic response to the George Floyd murder and the activism which has followed it. And though are doors are currently closed we were passionate about producing work that speaks to this moment and adds its voice to the vital push for change that is happening with the BlackLivesMatter movement.”

Please note that 846 contains very strong language and discusses themes some may find sensitive or upsetting.

846 Live is a co-production between GDIF, TRSE and the Royal Docks Team.

846 has been supported by the Royal Docks Team.

THE PRINCE OF EGYPT, the hit musical based on the classic DreamWorks Animation film, is proud to confirm the complete cast, orchestra and company of … END_OF_DOCUMENT_TOKEN_TO_BE_REPLACED

Tom loves a laugh! But it’s no joke when he can’t even remember where he’s parked the car... Fortunately, his loving wife Trish comes to the … END_OF_DOCUMENT_TOKEN_TO_BE_REPLACED

Following a sell-out tour in 2018/2019, the producers of the smash-hit ROCK OF AGES are delighted to announce the cast and Kevin Clifton’s return in … END_OF_DOCUMENT_TOKEN_TO_BE_REPLACED

The classic tale of The Three Musketeers is brought to you by the inconceivable, unimaginable and fantastical FoolHardy Theatre… a company with … END_OF_DOCUMENT_TOKEN_TO_BE_REPLACED