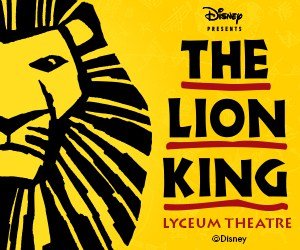 After the success of dedicated Autism-Friendly Performances in 2013 and 2014, a third dedicated performance of Disney’s THE LION KING has been announced for Sunday 30th August 2015 at 1:30pm. Tickets now on sale.

THE LION KING staged the West End’s first dedicated Autism-Friendly Performance in April 2013. Working with The National Autistic Society, the UK’s leading charity for people with autism and their families, The Walt Disney Company modified the performance to make it more appropriate to those affected by autism.

Autism is a serious, lifelong and disabling condition, affecting children and adults. As a ‘spectrum’ condition it affects each person in different ways, but people with autism tend to experience common social difficulties understanding and relating to other people, and the world around them. Sudden changes in routine or environment can be unbelievably frightening and stressful. Sensory issues can also prove problematic: for example a person may dislike bright lights, or may have very sensitive hearing and find noise, including background noise intrusive, distracting and even painful.

Clearly, a visit to a musical on the scale of THE LION KING, in London’s busiest theatre, could prove an overwhelming experience for a considerable number of people in the UK who have autism; over 500,000 are thought to have the condition. While other West End productions have presented “relaxed” performances, THE LION KING remains the only production to adapt a performance specifically for people affected by autism.

The dedicated Autism-Friendly Performances of THE LION KING include modifications to the booking process, performance and the theatre environment, including:

The theatre’s foyer includes assigned quiet and activity areas; staffed by experts in autism throughout the performance should anyone need to leave their seats. Slight adjustments are made to the performance itself, including the reduction of jarring sounds or strobe lighting that face the audiences.

The cast of The Lion King along with Lyceum Theatre box office and front of house staff have been given training to help understand the needs of an audience of families and friends with children and adults who have an autism spectrum disorder.

An autism-friendly website and booking system has been set up specifically for this performance, including a downloadable ‘social story’ to help people with autism understand the process of a visit to the theatre, thus aiding their comprehension of the experience and reducing anxiety by explaining each step from arriving in the foyer to the final curtain call.

BOOK TICKETS HERE FOR AUTISM FRIENDLY-PERFORMANCE: Friends and families can find out more information and buy tickets at www.lionkingautismfriendly.co.uk. Tickets are sold at a specially discounted rate and can be selected on a virtual map of the auditorium.

Disney’s award-winning musical THE LION KING is now in its 16th triumphant year at London’s Lyceum Theatre. Since the UK premiere in London on Tuesday 19th October 1999, THE LION KING has entertained over 12 million theatregoers and remains the West End’s best-selling stage production. It also recently became the sixth longest-running West End musical of all time.

Julie Taymor’s internationally-celebrated stage adaptation of Disney’s beloved animated film premiered on Broadway in 1997 and has now been seen by almost 80 million people across six continents. Nine productions are running concurrently around the globe: In addition to the record-breaking productions in London and New York, The Lion King can currently be seen in Hamburg, Madrid, Tokyo, Brisbane, Basel and on tours of the North America and Japan. A tenth production is currently in rehearsal in Mexico City, and due to begin performances in May. In the future the production is set to open at Shanghai Disney Resort.

Book tickets for The Lion King Musical
(not autism-friendly performances)