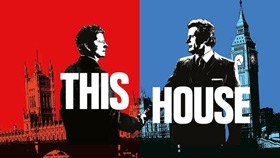 ★★★★★ ‘Ferociously witty and permeated by a deep sense of the tragi-comic nature of all political systems.’ Daily Telegraph

‘This country is being kept alive on aspirin when what it needs is electric bloody shock therapy.’
James Graham’s critically acclaimed political drama This House will transfer to the Garrick Theatre, following its upcoming run at Chichester’s Minerva Theatre. Having originally played two sell-out seasons at the National Theatre.

Writer, James Graham commented, “This House was a very surprising and completely remarkable experience for me when produced at the National 3 years ago. The idea that it’s going to find new audiences again is really brilliant and I’m so grateful. We’re no longer in a hung parliament – like the 1970s equivalent depicted in the play – but in some ways, I think it’s become more relevant as more of us are deeply questioning the effectiveness and viability of our current political systems, here and around the world.”

Director, Jeremy Herrin said, “A play that looks at our democracy is always going to be timely, and there’s a joyful theatricality in the way This House represents our parliamentary process, with all its ludicrous quirks. The human drama in the middle of this system is represented movingly and with great generosity.

There has always been such good will around this show, so it’s brilliant we can share it with more people at The Garrick, an appropriate stone’s throw from the House of Commons.”

1974. The UK faces economic crisis and a hung parliament. In a culture hostile to cooperation, it’s a period when votes are won or lost by one, when there are fist fights in the bars and when sick MPs are carried through the lobby to register their vote. It’s a time when a staggering number of politicians die, and the building creaks under idiosyncrasies and arcane traditions.

Set in the engine rooms of Westminster, James Graham’s This House strips politics down to the practical realities of those behind the scenes: the whips who roll up their sleeves and on occasion bend the rules to shepherd and coerce a diverse chorus of MPs within the Mother of all Parliaments.

This House is written by James Graham whose recent work for the Donmar Warehouse includes The Vote, which was also broadcast live on election night, and Privacy, which will open this summer at the Public Theater in New York; and Coalition for Channel 4. Direction is by Headlong Artistic Director Jeremy Herrin whose previous work includes South Downs, Uncle Vanya and Another Country at Chichester as well as People, Places and Things (Headlong/National Theatre and Wyndham’s) and Wolf Hall/Bring Up the Bodies (RSC Stratford, Aldwych and Broadway).

Cirque du Soleil has announced the London run for one of its most critically acclaimed touring show KURIOS— Cabinet of Curiosities. Opening on 13th … END_OF_DOCUMENT_TOKEN_TO_BE_REPLACED

Ambassador Theatre Group Productions are delighted to announce a UK and Ireland Tour of the pantomime MOTHER GOOSE. The first of its kind to tour the … END_OF_DOCUMENT_TOKEN_TO_BE_REPLACED

The National Theatre’s new musical Hex returns to the Olivier theatre for Christmas, after its original 2021 opening was delayed due to covid. The … END_OF_DOCUMENT_TOKEN_TO_BE_REPLACED