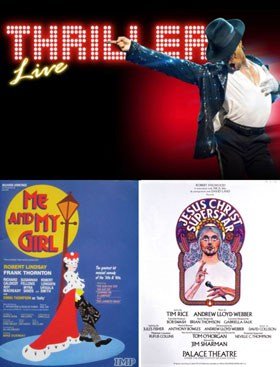 Thriller Live smashes yet another West End record! After 3,304 performances it topples Me & My Girl to become the 16th Longest-Running Musical of all Time!

Thriller Live has smashed yet another West End record to become London’s 16th Longest Running Musical of all time.

And another is due to fall soon… on Saturday February 4th 2017, Thriller Live will play its 3,358th show at the Lyric, when it will topple Andrew Lloyd Webber and Tim Rice’s legendary 1972 rock opera, “Jesus Christ Superstar” to become no 15 in the official West End Hall of Fame.

Thriller Live, the West End concert spectacular, created to celebrate the career of the world’s greatest entertainer, Michael Jackson and The Jackson Five, is currently the 7th longest running West End Musical still playing – but that will change again when “Jersey Boys” closes in March.

Thriller Live recently announced yet another new booking period to October 1, 2017. Thriller Live first opened in the West End in January 2009. It never fails to get the audience on its feet and has received nightly standing ovations at the Lyric Theatre, where it holds the record as the longest-running show since the theatre started entertaining the capital in December 1888.

Thriller Live recently sold its 2 millionth West End ticket and has now been seen by over 4 milion people in 33 countries and played over 5,100 performances worldwide.

Thriller Live is unlike other West End musicals. There is no script or story, it is instead an eye-popping spectacular concert celebration of Michael Jackson’s music and dance legacy, bringing to life on stage his amazing high-energy dancing and the pulsating sound of many of pop’s greatest hits, featuring specially
created video footage and effects and dazzling choreography by the show’s award-winning director, Gary Lloyd.

After creating the “absorbing and provocative” Version 2.0 and the “eminently lovable” Letters, Kashyap Raja returns to London with his new play Earth … END_OF_DOCUMENT_TOKEN_TO_BE_REPLACED