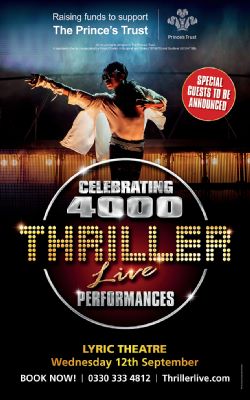 Thriller Live is to celebrate a record-breaking 4,000 West End shows with a glittering Gala Charity Performance in aid of The Prince’s Trust on Wednesday 12th September, 2018 featuring major guest stars.

Thriller Live’s producers announce a partnership with The Prince’s Trust to provide a year-long outreach programme.

West End concert spectacular, Thriller Live is teaming up with The Prince’s Trust to celebrate their record-breaking 4000th performance at the Lyric Theatre on Wednesday 12th September, 2018.

For one night only and to raise funds for The Prince’s Trust, high profile special guest stars from the world of music and entertainment – names to be announced – will perform Michael Jackson tracks alongside the West End cast for this very exciting gala charity performance.

It promises to be a truly unforgettable night!

All proceeds from tickets sales will be donated to The Prince’s Trust and the gala night will launch a year-long partnership and commitment to provide tickets, workshops and a mentoring programme.

Thriller Live Producers Paul Walden & Derek Nicol of Flying Music and Executive Director Adrian Grant of Key Concerts said: “We are proud to announce that Thriller Live, which is now in its 10th year in the West End, is partnering with The Prince’s Trust for this one-off charity gala performance and that we will be supporting this wonderful charity over the next year with its mandate to help disadvantaged young people get their lives on track with opportunities to see the show, Q & A sessions, art programmes, workshops and mentoring experiences with our creative team, dancers and singers.”

Ian Jeffers, Deputy Chief Executive at The Prince’s Trust said: “We’d like to say a huge thank you to everyone at Thriller Live for inviting us to share the spotlight with them at this milestone moment. The funds raised through the 4000th Thriller Live performance, along with the Thriller Live team’s commitment to provide experiences and mentoring over the next year, will help us to support even more young people to develop the confidence and skills they need to realise their ambitions.”

Thriller Live, created by Michael Jackson author and associate Adrian Grant and directed by award-winning choreographer Gary Lloyd, is unlike any other West End musical. There is no script or story, it is instead an eye-popping celebration of Michael Jackson’s music and dance legacy, bringing to life on stage his distinctive high-energy dancing and the pulsating sound of many of pop’s greatest hits.

Thriller Live first Moonwalked into the Lyric Theatre on Shaftesbury Avenue in January 2009. It holds the record as the longest ever run of a show since the theatre started entertaining the capital in December 1888, and the record as the 6th longest running musical currently playing in the West End. It has been seen by over 4.5 million people in 33 countries and played over 6,000 performances worldwide, never failing to get a standing ovation!