You are here: Home / London Theatre News / Thriller Live will end its record-breaking 11-year run at the Lyric Theatre in April 2020 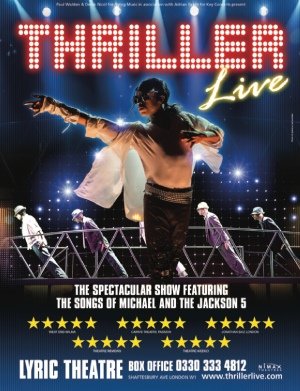 Nimax, who own several West End theatres, are planning to carry out a major refurbishment of the Lyric Theatre, with work due to commence in May 2020.

To allow for this work to be completed Thriller Live will end its record-breaking 11-year run at the theatre on Sunday 26 April 2020, at which point the show will have completed 4,705 performances making it the longest running show ever at the Lyric theatre and the 11th longest running musical in West End history.

Plans are in hand to transfer Thriller Live to another West End theatre and a second production will start a 12-month world tour, opening in Lausanne Switzerland on 27 December 2019.

Thriller Live will now spend its final 7 months at the Lyric theatre celebrating its record-breaking success there with a series of special events, big name surprise guest stars following in the footsteps of Peter Andre at the 4,000th perforrmance, and starting with the publication next month of the show’s award-winning Director/Chorerographer, Gary Lloyd’s revealing fly-on-the-wall book, “My Life With Michael – Ten Years of Thriller Live’.

Nica Burns for Nimax said: “Thriller Live has had the most extraordinary run at the Lyric making our audiences very happy. The show will continue to thrill and entertain worldwide for many years to come.”

Producers Paul Walden and Derek Nicol said: “Audiences at the Lyric Theatre have had a wonderful 11 years enjoying the magic of Michael Jackson’s outstanding musical legacy. A big thank you to the Nimax team particularly the fantastic staff at the Lyric Theatre for our record-breaking run as we plan the next chapter of the show’s incredible journey.”