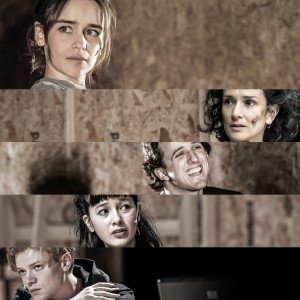 Tickets are on sale to ATG Theatre Card Members now, and those signed up for priority booking at 12pm today, Monday 10th January; general booking opens Wednesday 12th January at 10am.

The company continues its commitment to accessibility, with 12,000 tickets priced at £15 available across The Seagull and the UK productions of Edmond Rostand’s Cyrano de Bergerac, freely adapted by Martin Crimp, directed by Jamie Lloyd, and starring James McAvoy.

For The Seagull, there will be specific performances throughout the run, where half the seats in the house are £15. These tickets are exclusively for under 30s, key workers and those receiving government benefits.

In addition, a dedicated outreach manager is distributing 5,000 free tickets amongst both secondary state schools and community organisations who otherwise would not have access to the theatre. Those working with a group who does not have the means or opportunity to visit the theatre, can register their interest here.

THE SEAGULL
A version by Anya Reiss

Harold Pinter Theatre: 29 June – 10 September 2022
Press night: Thursday 7 July at 7.30pm
‘We need the theatre, couldn’t, couldn’t do without it. Could we?’
A young woman is desperate for fame and a way out. A young man is pining after the woman of his dreams. A successful writer longs for a sense of achievement. An actress wants to fight the changing of the times. In an isolated home in the countryside where dreams are in tatters, hopes dashed, hearts broken and there is nowhere left to turn, the only option is to turn on each other.

Book Tickets for Plays in London

The National Theatre’s new musical Hex returns to the Olivier theatre for Christmas, after its original 2021 opening was delayed due to covid. The … END_OF_DOCUMENT_TOKEN_TO_BE_REPLACED

As it celebrates its 8th anniversary in the West End, The Play That Goes Wrong, the Olivier Award-winning smash hit announces an extension to the … END_OF_DOCUMENT_TOKEN_TO_BE_REPLACED

Producer Josh Andrews has today announced the lead cast for the UK tour of Peter James’ Wish You Were Dead: George Rainsford, will star as James’ … END_OF_DOCUMENT_TOKEN_TO_BE_REPLACED

MAMMA MIA! THE PARTY, London’s premier dining experience, is delighted to announce the new cast arriving at Nikos Taverna on the Greek island of … END_OF_DOCUMENT_TOKEN_TO_BE_REPLACED

Perform Productions is delighted to announce the cast and creative team for the West End premiere of Magical Merlin this October half-term. The … END_OF_DOCUMENT_TOKEN_TO_BE_REPLACED